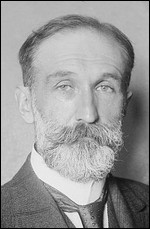 Henri Rabaud (10 November 187311 September 1949) was a French conductor and composer, who held important posts in the French musical establishment and upheld mainly conservative trends in French music in the first half of the twentieth century.[1][2]

Rabaud came from a musical background. He was the son of a cellist Hippolyte Rabaud (1839-1900), professor of cello at the Paris Conservatoire, while his mother was a singer who almost created the role of Marguérite at the request of Gounod.[2] His maternal grandfather was a well-known flautist,[2] while his great aunt was Julie Dorus-Gras.[1]

Henri studied at the Conservatoire with André Gedalge and Jules Massenet. In 1908, he became a conductor at the Paris Opéra-Comique where he later conducted the 100th performance of his opera Mârouf, savetier du Caire,[3] and from 1914 to 1918 he directed the Paris Opéra. In 1918 he became musical director of the Boston Symphony Orchestra for only one season before returning to Paris. While in Boston, he was elected to membership in the Alpha Chapter of Phi Mu Alpha Sinfonia Fraternity, the national fraternity for men in music.

Following the resignation of Gabriel Fauré in 1922, Rabaud was his successor as director of the Conservatoire, where he remained until his retirement in 1941. Under the Vichy Regime, he compiled a dossier describing in detail the racial make-up of all Conservatoire students.[4]

Rabaud's cantata Daphné won the Premier Grand Prix de Rome in 1894. His opera comique Mârouf, savetier du Caire combines the Wagnerian and the exotic. He wrote other operas, including L'appel de la mer based on J. M. Synge's Riders to the Sea, as well as incidental music and film scores, such as the 1925 score for Joueur d'échecs (Chess Player).

Orchestral music by Rabaud includes a Divertissement on Russian songs, an Eglogue, a Virgilian poem for orchestra, as well as the symphonic poem La procession nocturne, his best known orchestral work, still occasionally revived and recorded. He also wrote music for chorus and orchestra and two symphonies.

His chamber music includes several works for cello and piano as well as a Solo de concours for clarinet and piano a virtuosic competition piece written in 1901 for Conservatoire contests.

Conservative as a composer, he was known for his mantra, "modernism is the enemy."

This article uses material from the article Henri Rabaud from the free encyclopedia Wikipedia and it is licensed under the GNU Free Documentation License.

Don't Go Martin Brothers feat. Kristina
Update Required To play the media you will need to either update your browser to a recent version or update your Flash plugin.