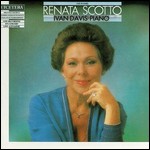 Recognized for her sense of style, musicality and as a remarkable singer-actress, Scotto is considered one of the preeminent singers of her generation, specializing in the bel canto repertoire with excursions into the verismo and Verdi repertoires.

Since retiring from the stage as a singer in 2002, she has turned successfully to directing opera as well as teaching in Italy and America, along with academic posts at the Accademia Nazionale di Santa Cecilia in Rome and the Juilliard School in New York. She lives in Armonk, New York with her husband Lorenzo Anselmi.

Renata Scotto was born in Savona, Italy. She made her operatic debut in her home town on Christmas Eve of 1952 at the age of 18 in front of a sold-out house as Violetta in Verdi's La traviata. The next day, she made her 'official' opera debut at the Teatro Nuovo in Milan as Violetta. Shortly after, she performed in her first Puccini opera, Madama Butterfly, in Savona and was paid twenty-five thousand lire. Both roles would later become closely associated with her name.

In 1953, Scotto auditioned at La Scala for the role of Walter in Catalani's La Wally with Renata Tebaldi and Mario del Monaco. After her audition, one of the judges, the conductor Victor de Sabata, was heard to say, "Forget about the rest." La Wally opened on 7 December 1953 and Scotto was called back for fifteen curtain calls. Tebaldi and Del Monaco each received seven.

Scotto's major breakthrough came in 1957: At the Edinburgh Festival, La Scala performed their production of Bellini's La Sonnambula with Maria Callas as Amina. The production was so successful that the company added an additional performance. Callas however declined to perform due to illness, saying that she had already appeared in the other performances against her doctor's orders. Scotto, covering the role of Amina, replaced Callas on 3 September 1957. The performance was a great success, and the 23-year-old Scotto became an international opera star.

In 1961 she performed Amina again at Venice's La Fenice with tenor Alfredo Kraus with whom she shared the same teacher, Mercedes Llopart, and a long professional association.

During the 1960s she became one of the leading singers in the belcanto revival initiated by Callas during the 1950s. She sang Bellini's Zaira and La straniera, plus Giulietta in Bellini's I Capuleti e i Montecchi, Donizetti's Maria di Rohan, Meyerbeer's Robert le Diable (in Italian) and other repertoire rarities. In 1964 she performed with La Scala at the Bolshoi Theatre in Moscow, the first opera company tour to the Soviet Union during the Cold War years.

Her American debut was as Mimì in La bohème at the Lyric Opera of Chicago in 1960, the same year she married violinist Lorenzo Anselmi. The couple has a daughter and a son. On 13 October 1965, Scotto made her Metropolitan Opera debut as Cio-Cio-San in Madama Butterfly. She went on to sing more than 300 performances in 26 roles at the Met through 1987 and settled to live with her family in nearby Westchester County.

With Luciano Pavarotti she opened the series of Live from the Met telecasts in 1977 with Puccini's La bohème. During the following years she starred in the telecasts of Manon Lescaut, Luisa Miller, Don Carlo, Il trittico, Francesca da Rimini and as Desdemona with Jon Vickers in Verdi's Otello.

In 1971, Scotto performed for a hostile audience for the first time in her career. While singing Elena in Verdi's I vespri siciliani, there was a demonstration from a small but very loud group shouting, "Brava, Callas". They continued to shout "Maria, Maria" and more "Brava, Callas" with Maria Callas sitting in the stage box watching Scotto's performance. Callas, though, would not acknowledge the shouts of the hecklers and instead gave Scotto a standing ovation at the end of her performance. Scotto's opening night Norma in 1981 was less than a great success but her subsequent performances at the Met during the 1981-82 season were very successful as they were on tour.

For more than 40 years, Scotto performed in operas written by 18 composers and her repertoire included some forty-five roles. She is best known for her performances as Violetta in La traviata, Gilda in Rigoletto, Cio-Cio-San in Madama Butterfly, Mimì (and occasionally Musetta) in La bohème, Lucia in Lucia di Lammermoor, Adina in L'elisir d'amore, Liù in Turandot, Nedda in Pagliacci, all three leading soprano roles in Puccini's Il trittico, Adriana Lecouvreur, and Francesca in Zandonai's Francesca da Rimini.

She also had success at the Met in Meyerbeer's Le prophète, Ponchielli's La gioconda, as Vitellia in Mozart's La clemenza di Tito. Moving into the heavier Verdi repertoire in the 1970s, she sang Elisabetta in Don Carlo, Luisa Miller, Lady Macbeth, Leonora in Il trovatore and the Requiem, all under the baton of the Met's music director James Levine.

In February 2008, Scotto hosted an artists' roundtable during the intermission of the Met broadcast of Cilea's Adriana Lecouvreur and in 2009 she was back for another round-table with Natalie Dessay and Juan Diego Florez.

Some of Renata Scotto's finest recordings came from the late 1950s and 1960s, during which her voice was at its freshest. Examples of Scotto at her best are her Lucia di Lammermoor with Giuseppe di Stefano and Ettore Bastianini in a Mercury recording from 1959, as well as her Deutsche Grammophon recordings of La traviata with Gianni Raimondi and Ettore Bastianini and La bohème with Gianni Poggi and Tito Gobbi, both which were conducted by Antonino Votto in the early 1960s. Her 1966 recording of Madama Butterfly with Carlo Bergonzi and Rolando Panerai, under Barbirolli for EMI is frequently referred to as definitive.

It's worth noting also that Scotto recorded (either in studio or in live performance) the complete Puccini soprano repertoire with the exceptions of Turandot, Magda in La rondine and Minnie in La fanciulla del West. Many of these were recorded with Lorin Maazel for Columbia Records.

This article uses material from the article Renata Scotto from the free encyclopedia Wikipedia and it is licensed under the GNU Free Documentation License.

The Sign Ace Of Base
Update Required To play the media you will need to either update your browser to a recent version or update your Flash plugin.