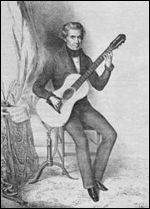 Born in Madrid, he studied with Miguel García. In 1826, Aguado visited Paris, where he met and became friends with and for a while lived with Fernando Sor.[1] Sor's duo Les Deux Amis ("The Two Friends") commemorated the friendship: one part is marked "Sor" and the other "Aguado."

Aguado's major work Escuela de Guitarra was a guitar tutor published in 1825.[1] As of 2011, it is still in print, with Tecla Editions releasing a reprint in 2005.[2] In the Escuela Aguado describes his use of fingernails on the right hand as well as his invention of a "tripodion": a device that held the guitar and thus minimized the damping effect of the player's body on the guitar's back and sides.[3] Aguado's other works include Trois Rondos Brillants (Opus 2), Le Menuet Affandangado (Opus 15), Le Fandango Varie (Opus 16), as well as numerous waltzes, minuets, and other light pieces. The more extended works require a virtuoso technique and left-hand stretches that are almost impossible on the longer string lengths of modern guitars. (See Frederick Noad, "The Classical Guitar")

Aguado's surname comes from the Spanish word for "soaked." (This is because an ancient relative of his, who was a knight, returned after a battle caked in mud. The nickname then eventually became the surname.[3]

Of the instruments used by Aguado, two which were built by

are held at the Museo Arqueológico Nacional in Madrid. Aguado is known for having used a tripod to support his guitar.[4][5][6]

This article uses material from the article Dionisio Aguado y García from the free encyclopedia Wikipedia and it is licensed under the GNU Free Documentation License.