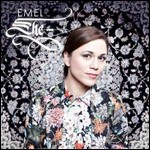 Emel Aykanat (born 8 June 1975),[1] better known as Emel, is a Turkish-Swiss singer. Her first big success came with the single Somebody Dance with Me with DJ BoBo.

At the age of 17 years, she toured as a background singer with Six Was Nine a German pop and soul band through Europe.

Aykanat's first success was in 1993 as a female voice in the song Somebody Dance with Me by DJ BoBo which appeared in various clubs.[2] Her first album Can we Talk appeared in 1996 and reached 26th in the Swiss charts.[3]

In 2001, Aykanat was part of a duet with the Swiss rapper Bligg.

The current album Come into my life was the first German-language album in 2007.

She entered the Swiss selection for the Eurovision Song Contest 2012, with a song called "She".

This article uses material from the article Emel Aykanat from the free encyclopedia Wikipedia and it is licensed under the GNU Free Documentation License.