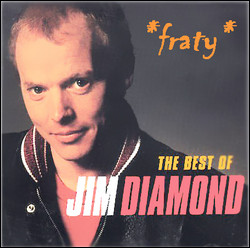 James "Jim" Diamond (born 28 September 1953, Glasgow) is a Scottish singer-songwriter, best known for his three Top 5 hits. The first was "I Won't Let You Down" (1982), as the lead singer in the trio Ph.D., with Tony Hymas and Simon Phillips. His solo performance, "I Should Have Known Better", was a United Kingdom number one in 1984.[1] The third track was the theme song from Boon, "Hi Ho Silver" which reached Number 5 in the UK Singles Chart in 1986.[1] He has also featured as a vocalist on the charity No.1s "You'll Never Walk Alone" with The Crowd and "Let It Be" with Ferry Aid.

He started his music career at the young age of 15 with his own band, The Method. This was discovered through a recent interview with Jim Diamond.[2] Diamond, at age 16, also fronted a Glasgow band called Jade.[3] That lineup included bassist Chris Glen who went on to play with "The Sensational Alex Harvey Band" and Jim Lacey on lead guitar who later went on to join The Alan Bown!. Jade played many pub, club and college gigs in London in 1969, playing at Brunel University, West London College in Cricklewood, The Pied Bull in Islington, West Hampstead Country Club, another college in Virginia Water and many more in 1969. They also supported The Move on their Scottish tour with The Stoics in the same year.

Diamond was discovered by Alexis Korner.[5] He spent the next couple of years as part of Korner's band. He provided additional and backing vocals on many of Korner's songs. Most of which would appear on The Lost Album.

In 1976 Diamond left Korner to form Bandit. The line-up included AC/DC band member Cliff Williams. They were soon signed up by Arista Records and released their début album, Bandit. They failed to reach the chart. In 1979 Diamond was lead vocalist for a Japanese band called BACCO. The debut album was Cha Cha Me.

Diamond went to Los Angeles, California to form Slick Diamond with Earl Slick.[6] He spent some time touring and recording and provided music for a film soundtrack.

1982 would be Diamond's big break into the public eye when he formed Ph.D. (Phillips, Hymas and Diamond), with pianist/keyboard player Tony Hymas and drummer Simon Phillips. They were signed by WEA Records and had a hit single with the multi-million selling "I Won't Let You Down".

Diamond contracted hepatitis and the band later decided to part ways. In 1984, he decided to go solo and was signed to A&M Records. He had a number one hit with "I Should Have Known Better" and also was number one in Latin America. He scored another hit soon after with the theme song from Boon, "Hi Ho Silver". It reached Number 5 in the UK Singles Chart in May 1986. Diamond is also known for some guest vocals on two Genesis band members' solo outings including:

The 1999 compilation The Best of Jim Diamond compiles singles and B-sides from his short time with A&M Records.

In recent years, Diamond has teamed up with saxophonist Chris "Snake" Davis, who is known for his work with soul outfit, M People. The pair were known as The Blue Shoes, but more recently have been billed as Jim Diamond and Snake Davis.

In 2005, Diamond released his first studio album in eleven years. Souled and Healed also gave Diamond the single releases "When You Turn" and "Blue Shoes".

Diamond's son Lawrence has followed in his father's musical footsteps and is the bassist with the UK rock group, Official Secrets Act. The band signed a recording contract in 2008.

This article uses material from the article Jim Diamond (singer) from the free encyclopedia Wikipedia and it is licensed under the GNU Free Documentation License.

Cose della vita / Can't Stop Thinking Of You Eros Ramazzotti & Tina Turner
Update Required To play the media you will need to either update your browser to a recent version or update your Flash plugin.