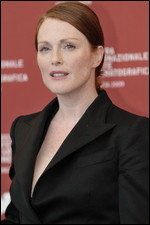 She began her acting career in 1983 in minor roles, before joining the cast of the soap opera As the World Turns, for which she won a Daytime Emmy Award in 1988. She began to appear in supporting roles in films during the early 1990s, achieving recognition in several independent films before her performance in Boogie Nights (1997) brought her widespread attention and nominations for several major acting awards.

Her success continued with films such as The End of the Affair (1999) and Magnolia (1999). She was acclaimed for her portrayal of a betrayed wife in Far from Heaven (2002), winning several critic awards as best actress of the year, in addition to several other nominations, including the Academy Award, Golden Globe, and Screen Actors Guild Award. The same year she was also nominated for several awards as best supporting actress for her work in The Hours. In 2009, she was nominated for a Golden Globe for A Single Man.

Moore remains active in filmmaking, with films scheduled for release in 2010, yet she has explained that she has curtailed her work in order to spend more time with her children.

Moore was born Julie Anne Smith at Fort Bragg near Fayetteville, North Carolina,[1] the daughter of the late Anne Love, a psychiatric social worker who emigrated from Greenock, Scotland,[2] and Peter Moore Smith, a military lawyer, judge, helicopter pilot, and army colonel.[3][4] She has a younger sister, Valerie, and younger brother, novelist Peter Moore Smith III.[5] Growing up as an "army brat", she lived in several places across the United States and Germany.[1] Moore attended J.E.B. Stuart High School in Falls Church, Virginia and Frankfurt American High School in Frankfurt, Germany, graduating in 1979.[1] She received her bachelor's degree at the College of Fine Arts at Boston University.[6]

Moore moved to New York City in 1983, working as a waitress and performing in bit parts before being cast in the dual roles of Frannie Hughes and Sabrina Hughes on the soap opera As the World Turns, for which she won a Daytime Emmy Award; she played the roles from 1985 to 1988.[1] In 1987 she was part of the junior company in the New York premiere of Caryl Churchill's Serous Money at The Public Theater. Because of Screen Actors Guild rules, she had to change her name, since there were already actresses named "Julie Smith" and "Julianne Smith".[1] She chose her father's middle name, "Moore", but because there was already another actress named "Julie Moore", she finally settled on "Julianne Moore."

Moore began starring in feature films in the early 1990s, mostly appearing in supporting roles in films like The Hand That Rocks the Cradle, Benny & Joon, and The Fugitive. Her part in 1993's Short Cuts gained her critical acclaim and recognition, and she was cast in several high-profile Hollywood films, including 1995's romantic comedy Nine Months, and 1997's summer blockbuster The Lost World: Jurassic Park. Her first role as the central lead, Carol White, in the well-reviewed independent film Safe also attracted critical attention. The role was called the ancestor of one of Moore's best-praised roles, Cathy Whitaker, in another Todd Haynes film, Far from Heaven.[1][7] Critics noted the importance of this role in establishing her as an actress to take seriously.[8] In addition, her performance on Vanya on 42nd Street, a filmed version of Chekhov's play, earned her critical recognition as being more than just a "blockbuster film" actress, with film critic Kenneth Turan calling her work in the film "a revelation".[9] For this role, Moore won "Best Actress" from the Boston Society of Film Critics.

Her film Freedomland opened in February 2006 to mixed reviews.[10] Another film, Trust the Man, directed by her husband, Bart Freundlich, featured her son, Caleb. In March 2006, it was announced Moore would make her Broadway debut in the world premiere of David Hare's new play The Vertical Hour. The play opened in November 2006 and was directed by Sam Mendes.[11] Also in 2006, Moore appeared as Julian Taylor in the film Children of Men. She most recently appeared opposite Nicolas Cage and Jessica Biel in Next, a science fiction action film based on The Golden Man, a short story by Philip K. Dick; and the controversial incest film Savage Grace, the story of a high-society mother and son whose Oedipal relationship ends in tragedy. In 2008, she starred in Blindness, a thriller from director Fernando Meirelles, costarring Mark Ruffalo. It premiered at Cannes and the Toronto International Film Festival.

Moore has been a celebrity spokesmodel for Revlon since 2002. She has appeared in print ads and commercials that also include Halle Berry, Susan Sarandon, Kate Bosworth, and Jessica Alba. She is signed to IMG Models in New York City.

A musical based on the book is scheduled to open at New World Stages Off-Broadway in New York City in October, 2010.

When the cancellation of As the World Turns was announced in late 2009, Moore decided to honor the soap that brought her fame and temporarily returned for a few days as Frannie Hughes, to which fans responded with great admiration.[12] During the 2009-2010 season of 30 Rock, she had a guest role as Nancy Donovan, a love interest for Alec Baldwin.[13]

Moore was married to John Gould Rubin from 1986 to 1995. In 1996 she began a relationship with director Bart Freundlich, whom she wed on August 23, 2003.[15] The couple had two children prior to their marriage: a son, Caleb (b. December 4, 1997), and a daughter, Liv Helen (b. April 11, 2002). Even though Moore has been a prolific actress for nearly three decades, she is now focusing on raising her two children, from walking them to school to cooking dinner. In a Cookie interview, Moore says she picks roles in movies that film in the summer so her family can accompany her: "My husband and I are very fortunate, because we have flexible jobs," she says. "If you talk to parents, that's what they're trying to do  have as much flexibility as possible."[16] She lives with her family in the West Village neighborhood of Manhattan.

She is a pro-choice activist[17][18] and during the 2004 presidential election donated $2,000 to John Kerry's presidential campaign.[19] Since 2002[20] she has been involved with the TS Alliance[21] to raise awareness of tuberous sclerosis and is an Artist Ambassador for Save the Children's programs in the United States.

This article uses material from the article Julianne Moore from the free encyclopedia Wikipedia and it is licensed under the GNU Free Documentation License.

Dancing In The Dark Bruce Springsteen
Update Required To play the media you will need to either update your browser to a recent version or update your Flash plugin.