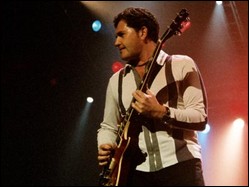 Charles "Charlie" Burchill (born 27 November 1959 in Glasgow)[1] is a Scottish musician and composer, best known as the guitarist of Simple Minds. He was one of the founders of the group.[2]

During Simple Minds' early to mid-1980s period, Burchill's guitar had a distinctive and atmospheric sound not dissimilar to Echo & the Bunnymen's Will Sergeant. Making heavy use of effects such as delay and chorus, his playing often provided subtle textures behind the band's more drum- and bass-propelled songs. This style was most apparent on 1982's New Gold Dream (81/82/83/84).[3] From 1983's album Sparkle in the Rain onwards the group evolved a different style, bringing Burchill's playing more into the foreground.[4]

As well as providing guitar, Burchill played the violin and saxophone on the band's first three studio albums and took over most studio keyboard duties following the 1989 departure of Mick MacNeil. Along with singer Jim Kerr, he is the only original member of the band left.

Burchill is a passionate football fan and a devout supporter of Celtic F.C.[5]

His nephew is football manager and former player Mark Burchill[6]

This article uses material from the article Charlie Burchill from the free encyclopedia Wikipedia and it is licensed under the GNU Free Documentation License.

Fields Of Gold Sting
Update Required To play the media you will need to either update your browser to a recent version or update your Flash plugin.