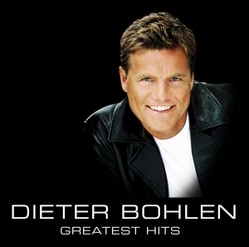 Dieter Günter Bohlen (born February 7, 1954) is a German musician, songwriter, record producer, and television personality. He first achieved notoriety as a member of the pop duo Modern Talking in the 1980s, and has since produced numerous German and international artists. He also is a judge on casting shows Deutschland sucht den Superstar and Das Supertalent, having been present on all seasons of both shows.

Bohlen was born in Berne, West Germany, and grew up in Oldenburg. His father was a supplier to the construction business. In 1973, Dieter Bohlen was member of the band Monza. In 1981 he was member of trio Sunday, and they had a hit "Hale Hey Louise", which has been covered by Ricky King and others. From 1983 to 1987 and from 1998 to 2003, Bohlen was one half of the pop duo Modern Talking as producer, songwriter and composer. From 1985 to 1988, he produced and wrote songs for the disco singer C. C. Catch.

After Modern Talking's first split in 1987, Bohlen formed Blue System. For most projects Bohlen had session singers for the background vocals to produce a high-pitched chorus. He frequently worked in the studio with the producer Luis Rodríguez. Rivalen Der Rennbahn is a soundtrack written by Bohlen. It was one of the best-selling albums in 1989 in Germany. Bohlen produced the German boygroup Touché which was founded by one of the group's five members, Karim Maataoui. In 1986, Bohlen wrote and produced Chris Norman's "Midnight Lady" for an episode of the German crime show Tatort. This song became a major hit in central Europe.

In the 1990s, Bohlen became producer for Bonnie Tyler under Hansa Records. They released three albums; Bitterblue, Angel Heart and Silhouette in Red. Tyler had great success with her single "Bitterblue", which was written and produced by Bohlen.

He has been a judge on all the seasons of the talent show Deutschland sucht den Superstar and has worked with acts discovered in the show, yielding several major hits. He is criticized for controversial and insulting comments ("You sing like a garden gnome on ecstasy", "Your voice sounds like Kermit getting his ass kicked"). Bohlen has also released five books. Two of these are autobiographical and describe his career, romantic involvements and experiences with singers. The first book was an unprecedented success in Germany. Both books were also released as audio books.

In 2006, Bohlen released an album called Dieter: Der Film that was a soundtrack to the movie of the same name.

In 2011, he founded the clothing label "Needs Clothing" along with Felix Werner.

He has also been a judge on the talent show Das Supertalent, the German version of Britain's Got Talent. He is the only judge to have been in every season of the show.

Dieter is the son of Edith and Hans Bohlen. His maternal grandmother is originally from Königsberg.[4] He has a sibling, a younger brother named Uwe. He was educated in Oldenburg, Göttingen and Hamburg, culminating in a Business Administration degree.

Bohlen was married to Erika Sauerland from 1983 to 1994 and has three children from the marriage: Marc, Marvin and Marielin.
In 1996 he married model and singer Verona Feldbusch but divorced her after thirty days, propelling Verona to celebrity status (she went on to host television shows such as Peep and Veronas Welt). Later, Bohlen lived with the 1979 born model Stefanie Küster until 2006. They have one son, Maurice-Cassian, born mid-2005.

He met his current girlfriend Carina Walz in Majorca, Spain, where one of the casting events for Deutschland sucht den Superstar (the German version of American Idol and Pop Idol) was held. They have a daughter, Amelie (born 2011) and a son, Maximilian (born 2013).

Bohlen lives in the village of Tötensen near Hamburg. He is left-handed, but was forced to learn how to write with his right hand at grammar school. He plays tennis with his left hand because he started tennis after his school years.

No. 1 Hits in Germany

Artists with Bohlen as producer (selection)

This article uses material from the article Dieter Bohlen from the free encyclopedia Wikipedia and it is licensed under the GNU Free Documentation License.

The Great Pretender Freddie Mercury
Update Required To play the media you will need to either update your browser to a recent version or update your Flash plugin.