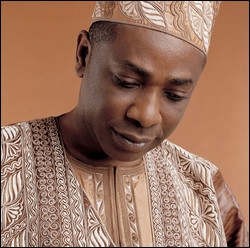 Youssou N'Dour (French pronunciation: ​[jusu nˈduʁ]; born 1 October 1959) is a Senegalese singer, songwriter, composer, occasional actor, businessman, and politician. In 2004, Rolling Stone magazine described him as, "perhaps the most famous singer alive" in Senegal and much of Africa.[1] From April 2012 to September 2013, he was Senegal's Minister of Tourism.

N'Dour helped to develop a style of popular Senegalese music known in the Serer language as mbalax, which derives from the conservative Serer music tradition of "Njuup".[2] He is the subject of the award-winning films Return to Gorée (2007) directed by Pierre-Yves Borgeaud and Youssou N'Dour: I Bring What I Love (2008) directed by Elizabeth Chai Vasarhelyi, which were released around the world.

In 2006, N'Dour was cast as Olaudah Equiano in the film Amazing Grace.

N'Dour was born in Dakar to a Wolof mother and a Serer father. He started performing at age 12 and was performing regularly with the Star Band, Dakar's most popular group during the early 1970s, within a few years. Several members of the Star Band joined Orchestra Baobab at about that time.

Despite N'Dour's maternal connection to the traditional griot caste, he was not raised in that tradition, which he learned instead from his siblings. His parents' world view encouraged a modern outlook, leaving him open to two cultures and thereby inspiring N'Dour's identity as a modern griot.

In 1979, he formed his own ensemble, the Étoile de Dakar. His early work with the group, in the Latin style, was popular all over Africa during that time. In the 1980s, he developed a unique sound with his ultimate group, Super Étoile de Dakar featuring Jimi Mbaye on guitar, bassist Habib Faye, and tama (talking drum) player Assane Thiam.

The New York Times described his voice as an "arresting tenor, a supple weapon deployed with prophetic authority".[9] N'Dour's work absorbed the entire Senegalese musical spectrum, often filtered through the lens of genre-defying rock or pop music from outside Senegalese culture.

In July 1993, Africa Opera composed by N'Dour premiered at the Opéra Garnier for the French Festival Paris quartier d'été.[10]

He wrote and performed the official anthem of the 1998 FIFA World Cup with Axelle Red "La Cour des Grands".[4]

Folk Roots magazine described him as the African Artist of the Century. He toured internationally for thirty years. He won his first American Grammy Award (best contemporary world music album) for his CD Egypt in 2005.

He is the proprietor of L'Observateur, one of the widest-circulation newspapers in Senegal, the radio station RFM (Radio Future Medias) and the TV channel TFM.

In 2002, N'Dour was honoured with a Prince Claus Award, under that year's theme "Languages and transcultural forms of expression".

In 2006, N'Dour played the role of the African-British abolitionist Olaudah Equiano in the movie Amazing Grace, which chronicled the efforts of William Wilberforce to end slavery in the British Empire.[11]

In 2008, N'Dour offered one of his compositions, Bébé, for the French singer Cynthia Brown.

In 2011, N'Dour was awarded an honorary doctoral degree in Music from Yale University.[12]

N'Dour was nominated as Goodwill Ambassador of the Food and Agriculture Organization of the United Nations (FAO) on 16 October 2000.[14]

In Senegal, N'Dour became a powerful cultural icon, actively involved in social issues. In 1985, he organized a concert for the release of Nelson Mandela. He was a featured performer in the 1988 worldwide Amnesty International Human Rights Now! Tour collaborating with Lou Reed on a version of the Peter Gabriel song "Biko" which was produced by Richard James Burgess and featured on the Amnesty International benefit album The Secret Policeman's Third Ball. He worked with the United Nations and UNICEF, and he started Project Joko to open internet cafés in Africa and to connect Senegalese communities around the world. He performed in three of the Live 8 concerts (in Live 8 concert, London, Live 8 concert, Paris and at the Live 8 concert, Eden Project in Cornwall) on 2 July 2005, with Dido.[15] He covered John Lennon's "Jealous Guy" for the 2007 CD Instant Karma: The Amnesty International Campaign to Save Darfur. He appeared in a joint Spain-Senegal ad campaign to inform the African public about the dramatic consequences of illegal immigration. N'Dour participated in the Stock Exchange of Visions project in 2007.[16]

In 2008, he joined the Fondation Chirac's honour committee.[17] The same year, Youssou N'Dour's microfinance organization named Birima ("Birima" is also a song's title) was launched with the collaboration of Benetton United Colors.

In 2009, he released his song "Wake Up (It's Africa Calling)" under a Creative Commons license to help IntraHealth International in their IntraHealth Open campaign to bring open source health applications to Africa. The song was remixed by a variety of artists including Nas, Peter Buck of R.E.M., and Duncan Sheik to help raise money for the campaign.[18]

N'Dour is a supporter of the Campaign for the Establishment of a United Nations Parliamentary Assembly, an organisation which advocates for democratic reformation of the United Nations.[19]

At the beginning of 2012, he announced plans to stand as a candidate in the 2012 Senegalese presidential election, competing against President Abdoulaye Wade.[20][21] However, he was disqualified from running in the election over the legitimacy of the signatures he had collected to endorse his campaign.[22] N'Dour backed the opposition candidate Macky Sall, who defeated Wade in a second round of voting in March 2012. N'Dour was appointed as Minister of Culture and Tourism in April 2012 as part of the cabinet of new Prime Minister Abdoul Mbaye.[23] The story of N'Dour's presidential campaign was filmed for the PBS TV program, "Sound Tracks: Music Without Borders." [24] Later his portfolio was modified and he was appointed as Minister of Tourism and Leisure. He was dismissed from that post on 2 September 2013, when a new government under Prime Minister Aminata Touré was appointed.[25] N'Dour was instead appointed as Special Adviser to the President, with the rank of minister,[26] and tasked with promoting the country abroad.[27]

This article uses material from the article Youssou N'Dour from the free encyclopedia Wikipedia and it is licensed under the GNU Free Documentation License.

The Mighty Quinn Manfred Mann
Update Required To play the media you will need to either update your browser to a recent version or update your Flash plugin.