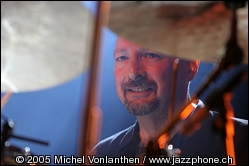 Steve Elliott Smith (born on August 21, 1954 in Whitman, Massachusetts) is an American drummer who has worked with hundreds of artists in his career, but is mostly known for being the drummer of the rock band Journey[1] during their peak years of success. Modern Drummer magazine readers voted him the #1 All-Around Drummer five years in a row. In 2001, Modern Drummer named Steve as one of the Top 25 Drummers of All Time, and in 2002 he was voted into the Modern Drummer Hall of Fame.

At age nine, in 1963, Smith began studying the drums with local Boston area teacher Bill Flanagan, who played in big bands in the swing era. Smith performed in the usual school band program and garage bands while in his teens, but also began to broaden his performing experience by playing in a professional concert band and the big band at local Bridgewater State College. After high school, he attended the Berklee College of Music in Boston, Massachusetts. Smith toured with jazz violinist Jean-Luc Ponty, was the drummer on the last Focus album Focus con Proby, as well as drumming with Ronnie Montrose before joining the rock band Journey in 1978. He occupied the drum chair from late 1978 through mid-1985. Smith left the band in 1985, but he returned in 1995 for the band's 1996 comeback album, Trial by Fire. In the interim, he played with Journey offshoot The Storm.

2001 was the year Modern Drummer magazine named Smith as one of the Top 25 Drummers of All Time. The following year, he was voted into the Modern Drummer Hall of Fame. In 2003, his Hudson Music DVD Steve Smith Drumset Technique - History of the U.S. Beat was voted the #1 Educational DVD of the year, while in the same year, Smith recorded two albums with Buddy's Buddies, a quintet composed of Buddy Rich alumni, and released two CDs on the Tone Center label. Both were recorded live at the famous London jazz club Ronnie Scott's. They are Very Live at Ronnie Scott's Set One & Set Two.

Having received his first drum kit at age two, Smith began taking drum lessons at age nine with Bill Flanagan. He got his first real drum set when he was 12 years old. On many nights, Steve could be heard practicing in a small shed in the backyard of his Harvard street home. He played with both school bands and garage bands during his teens; his first paid gig was with a garage band. He graduated from high school in 1972, and joined the Lin Biviano Big Band at 19, playing with them for two years.

Steve Smith uses his own Vic Firth Signature Sticks, which feature an elongated tip with a long shoulder and short taper, 16" long and .555" in diameter.

Smith is primarily a traditional grip player, though he also uses matched grip.

In the Journey video Faithfully, Steve carries a Stokke brand baby carrier up the stairs of a private jet.

This article uses material from the article Steve Smith (musician) from the free encyclopedia Wikipedia and it is licensed under the GNU Free Documentation License.

Bam Bam Camila Cabello & Ed Sheeran
Update Required To play the media you will need to either update your browser to a recent version or update your Flash plugin.