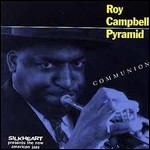 Roy Sinclair Campbell, Jr. (September 29, 1952 January 9, 2014) was an American trumpeter frequently linked to free jazz, although he also performed rhythm and blues, bebop and funk at times during his career.

Born in Los Angeles, California, in 1952,[1] Campbell was raised in New York. At the age of fifteen he began learning to play trumpet and soon studied at the Jazz Mobile program along with Kenny Dorham, Lee Morgan and Joe Newman.[2] Throughout the 1960s, still unacquainted with the avant-garde movement, Campbell performed in the big bands of the Manhattan Community College. From the 1970s onwards he performed primarily within the context of free jazz, spending some of this period studying with Yusef Lateef.[3]

In the early 1990s Campbell moved to the Netherlands and performed regularly with Klaas Hekman and Don Cherry.[2] In addition to leading his own groups, he performed with Yo La Tengo, William Parker, Peter Brotzmann, Matthew Shipp, and other improvisors. Upon returning to the United States he began leading his group Other Dimensions In Music and also formed the Pyramid Trio, a pianoless trio formed with William Parker.[2] He performed regularly as part of the Festival of New Trumpet Music, which is held annually in New York City.

He died in January 2014 of hypertensive atherosclerotic cardiovascular disease at the age of 61.[4][5]

with Other Dimensions In Music

with Yo La Tengo

This article uses material from the article Roy Campbell, Jr. from the free encyclopedia Wikipedia and it is licensed under the GNU Free Documentation License.

Never Die Young James Taylor
Update Required To play the media you will need to either update your browser to a recent version or update your Flash plugin.