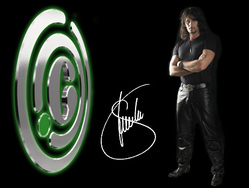 In 1992, in Lugano, along with guitarist Leo Leoni, bassist Marc Lynn, and drummer Hena Habegger, they founded the band Krak. Under the lead of bassist and founding member of Krokus, Chris von Rohr, the band changed its name to Gotthard (a name inspired by the Gotthard Pass).

In 2007, Lee was contacted by Arjen Anthony Lucassen to feature on Ayreon's latest album 01011001, released in 2008. He sang vocals, alongside other progressive rock and progressive metal singers.[1]

Steve Lee was killed in a motorcycle accident 10 miles south of Mesquite, Nevada on Interstate 15 when a semi truck hit a parked motorcycle which subsequently struck and killed Lee.[2]

This article uses material from the article Steve Lee (Gotthard singer) from the free encyclopedia Wikipedia and it is licensed under the GNU Free Documentation License.

Tutte le notti Tommaso Paradiso
Update Required To play the media you will need to either update your browser to a recent version or update your Flash plugin.