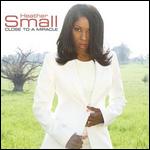 Heather Small (born 20 January 1965) is an English soul singer, best known for being the lead singer in the band M People. Her debut solo album was Proud in 2000. She was also a contestant in the British television show Strictly Come Dancing in 2008.

Small joined her first group, Hot House, while she was still a teenager. She was the studio singer voice of the re-recorded version of UK number 1 single "Ride on Time" from Italo House Band Black Box.[1] After a chance meeting with Manchester DJ Mike Pickering, formerly of Quando Quango, Small and her distinctive voice helped to sell over 10 million albums worldwide singing with his group M People. They had considerable success with songs such as "Moving on Up" and "Search for the Hero". Small has said that her major influence has been singer Elkie Brooks.

In 1997, Small performed on the "Perfect Day" record alongside a wide range of artists including Tom Jones and Lou Reed. The song was the official 1997 Children in Need charity release. It sold over a million copies and was the UK's number one single for three weeks, in two separate spells.

In 1998, after M People's "Best Of" album, Small and the band took some time off to pursue solo projects.

In 2000, Small released her debut solo album Proud and a single of the same name, closely affiliated with the British Olympics team of the time. The single "Proud" was also used for the first season and the last chapter on the finale season of Queer as Folk. "Proud" is Small's signature song, with which she achieved international success. When Oprah Winfrey was looking for a song to sum up the work she'd been striving to achieve over her twenty-year career, she got in touch with Small and the song "Proud" became the theme song to The Oprah Winfrey Show, and in 2005 Small made her American television debut on the show. Then in 2004 the song became the theme song for the American reality weight loss show The Biggest Loser.

A further single, "Holding On", followed and in November 2000 a duet single with Tom Jones, called "You Need Love Like I Do" (which can also be found on the 1999 album Reload).

Small then took taking time off to look after her son and to start recording her second solo album. She was occasionally seen on various TV programmes as Parkinson and Songs of Praise. She also sang three songs at the Tsunami Relief Concert at the Millennium Stadium in Cardiff.

In 2005, a second M People greatest hits collection was released. Ultimate Collection featured both the biggest M People hits and two of Small's solo singles. Small's solo song "Proud" was re-released from this album and reached number 33 on the UK Singles Charts. M People reformed and played together on an arena tour during 2005; they have played a few dates each year since.

Small released a new single, "Radio On" in the UK on 17 July 2006 and her second solo album, Close to a Miracle was released on 24 July, followed by a second single of the same name, which was released digitally on 25 September 2006 and included a previously unreleased track, "Changes". The album was a commercial disappointment, charting for one week at number 57 with both supporting singles charting outside the Top 100. A short UK solo tour which followed in the autumn of that year was received well.[2]

In 2007, Small collaborated with Icelandic tenor Garðar Thór Cortes on a song called "Luna". The song was released as a single from his album Cortes and reached number two in the Icelandic Charts. A new song was recorded to celebrate 200 years since the abolition of the slave trade, and Small performed at a concert in London to mark this anniversary on 10 November 2007.[3] On 26 May 2008 Small performed alongside Stereophonics and Feeder at the Millennium Stadium in Cardiff, as part of the celebrations of Wales's success at the 2008 Grand Slam.[4] In addition, Small performed three nights at Ronnie Scott's in October as part of her 2008 tour, and headlined at Manchester Pride.

On 24 August 2008 she performed at the Visa London 2012 Party to celebrate the handover as host city of the Olympic Games from Beijing, China, to London. Small sang "Proud" which was the unofficial anthem of Team GB at the Athens Games in 2004, and is the official anthem of the London 2012 Games. On December 2008, she again performed "Proud" on the 2008 BBC Sports Personality of the Year programme, as a soundtrack to a montage of British Olympian achievements at Beijing.

In 2008, Small was announced as one of the sixteen celebrities in the sixth series of BBC's Strictly Come Dancing. She was partnered with newcomer Brian Fortuna. The dancing couple placed 9th overall in the series, and in the series, Small was in the bottom two on four occasions: Week 4, 5, 7, and 8 where she was eventually voted by the judges and beaten by Rachel Stevens who was also in the dance-off. Small also appeared in an associated BBC Three series called "Dancing on Wheels".[5]

From late 2008 and throughout 2009, Small toured the UK. The setlist included Small's solo tracks, M People songs and some jazz covers.[6] In the final quarter of 2009, Small's back catalogue sales increased by 73% as a result of frequent references to her hit single "Proud" on the BBC 2 hit sitcom Miranda. She also appeared in the Miranda Comic Relief Special on 18 March 2011.

It was announced in July 2010 that Heather Small would take Chaka Khan's place alongside Anastacia and Lulu for the second Here Come the Girls. The tour took place across the UK during November and December 2010.[7]

In April 2011, Small performed as half time entertainment at London's Twickenham Stadium for the annual St. George's Day Premiership Rugby fixture hosted by London Wasps. Performing with educational events company 'Pro-Excel' Small, aptly performing ' Proud' and 'Search for The Hero' lead a backing dance troupe of 546 young people from schools around the UK and becoming the Guinness World Record Holder for 'The World's Biggest ever Backing Dance Troupe for a Popstar'

On 29 October 2012 Small appeared at the 2012 Pride Of Britain Awards singing "Proud" as a tribute to the athletes of the London 2012 Olympic Games.

Small is active in supporting several charities, such as "Beat Bullying", the Aiden Cox Foundation, Mencap (for which she performed) and St Luke's Midnight Walk. She attended an anti-racism ceremony at 10 Downing Street for "Show Racism The Red Card", attended by Sporting Elite, the Prime Minister and others. Small works regularly with Barnardo's; in addition she has also recently become an ambassador of Asthma UK, as she suffered from asthma as a child.[8]

This article uses material from the article Heather Small from the free encyclopedia Wikipedia and it is licensed under the GNU Free Documentation License.

What's The Use Paul Etterlin
Update Required To play the media you will need to either update your browser to a recent version or update your Flash plugin.