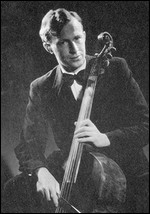 August Wenzinger (1905–1996) was a prominent cellist, viol player, conductor, teacher, and music scholar from Basel, Switzerland. He was a pioneer of historically informed performance, both as a master of the viola da gamba and as a conductor of Baroque orchestral music and operas.[1]

Wenzinger received his basic musical training at the Basel Conservatory, then went on to study cello with Paul Grümmer and music theory with Philipp Jarnach at the Hochschule für Musik in Cologne. He then took private cello lessons with Emanuel Feuermann in Berlin. Wenzinger served as first cellist in the Bremen City Orchestra (1929–1934) and the Basel Allgemeine Musikgesellschaft (1936–1970).

In 1933 Wenzinger assumed the leadership of the Kabeler Kammermusik, but the group was soon phased out under political pressure. Wenzinger moved to Basel the same year to accept an appointment to teach cello and viola da gamba at the newly founded Schola Cantorum Basiliensis.

Wenzinger was also an acclaimed conductor, and in 1949 he led a recording of the Brandenburg Concertos performed on original instruments for the Archiv record label. From 1954 to 1958 he led the Capella Coloniensis, the baroque orchestra of West German Radio in Cologne. In 1955 Wenzinger directed this orchestra in one of the first recordings of the opera L'Orfeo by Claudio Monteverdi. He led performances of Baroque operas at Herrenhausen in Hanover, Germany, from 1958 to 1966.

This article uses material from the article August Wenzinger from the free encyclopedia Wikipedia and it is licensed under the GNU Free Documentation License.

When Tomorrow Comes Eurythmics
Update Required To play the media you will need to either update your browser to a recent version or update your Flash plugin.