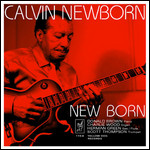 He was the brother of pianist Phineas Newborn Jr. (1931–89), with whom he recorded between 1953 and 1958. They also formed an R&B band, with their father Phineas Newborn Sr. on drums and Tuff Green on bass. The group also included Willie Mitchell and Ben Branch.

Newborn gave guitar lessons to Howlin' Wolf and was friends with Elvis Presley, who frequented his gig at the Plantation Inn Club two nights a week. Presley also used to eat at the Newborns' house and browse their music store for gospel records.[3]

The group left West Memphis in 1951 to tour with Jackie Brenston as the "Delta Cats" in support of the record "Rocket 88". It was considered by many to be the first rock and roll record ever recorded, and was the first Billboard number one record for Chess Records.[4]

Following this he played with Earl Hines starting in 1959. In the early 1960s, he toured with Lionel Hampton, Jimmy Forrest, Wild Bill Davis, Al Grey, and Freddie Roach, along with fellow Memphis jazz luminaries including Booker Little, George Coleman. Frank Strozier, and Louis Smith. Newborn also worked with Ray Charles, Count Basie, Hank Crawford and David "Fathead" Newman. Since the 1970s Newborn had remained mostly in Memphis, Tennessee, where he played regularly in local clubs well into the 1990s.[5] His 1980 album Centerpiece hit No. 35 on the U.S. Billboard jazz albums chart,[6] but much of his earlier material was not reissued on CD until 2005. He lived most recently in Jacksonville, Florida, and continued to perform throughout Northeast Florida until his death.[3]

According to family members, Calvin Newborn died in Jacksonville on December 1, 2018, aged 85.[1]

This article uses material from the article Calvin Newborn from the free encyclopedia Wikipedia and it is licensed under the GNU Free Documentation License.