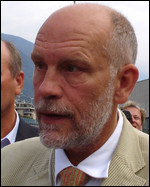 John Gavin Malkovich (born December 9, 1953) is an American actor, producer, and director. Over the last 25 years, Malkovich has appeared in more than 70 motion pictures. For his roles in Places in the Heart and In the Line of Fire, he received Academy Award nominations. He has also appeared in critically acclaimed films such as Empire of the Sun, The Killing Fields, Dangerous Liaisons, Being John Malkovich, and Changeling.

Malkovich was born in Christopher, Illinois, to a family of Croatian,[1][2][3][4] Scottish and German ancestry.[3][5] His paternal grandparents were native of Ozalj, near Karlovac, in Croatia.[6] He grew up in Benton, Illinois, in a large house on South Main Street. His father, Daniel Malkovich, was a state conservation director and publisher of Outdoor Illinois, a conservation magazine. His mother, Joe Ann (née Choisser), owned the Benton Evening News (a local newspaper in Benton, Il.), as well as Outdoor Illinois.[7][8] Malkovich attended a Catholic school in the Chicago suburb of Highland Park.[9] He appeared in plays and the musical, Carousel. He was also a member of a folk/rock musical trio, and was an organizer and member of a local summer theater project in 1972, where he starred in Jean-Claude Van Itallie's America Hurrah. Upon graduation from high school, he entered Eastern Illinois University, and then transferred to Illinois State University, where he majored in theatre.

In 1976, Malkovich, along with Joan Allen, Gary Sinise, and Glenne Headly, became a charter member of the Steppenwolf Theatre Company in Chicago.[7] He moved to New York City in 1980 to appear in a Steppenwolf production of the Sam Shepard play True West, for which he won an Obie Award.[10][11] Malkovich then directed a Steppenwolf co-production, the 1984 revival of Lanford Wilson's Balm in Gilead, for which he received a second Obie Award and a Drama Desk Award.[10] His Broadway debut that year was as Biff in Death of a Salesman, alongside Dustin Hoffman as Willy. Malkovich won an Emmy Award for this role when the play was adapted for television by CBS in 1985.

One of the actor's first forays into film was as an extra alongside Allen, Terry Kinney, George Wendt, and Laurie Metcalf in Robert Altman's 1978 film A Wedding. He made his feature film debut in 1984, as Sally Field's blind boarder Mr. Will in Places in the Heart; for his portrayal of Mr. Will, Malkovich received his first Academy Award nomination for Best Supporting Actor. He also portrayed Al Rockoff in The Killing Fields. He continued to have steady work in films like Empire of the Sun, directed by Steven Spielberg, and the 1987 film adaptation of Tennessee Williams's The Glass Menagerie, with Paul Newman and Joanne Woodward. A few years later, Malkovich became a star when he portrayed the sinister and sensual Valmont in the 1988 film Dangerous Liaisons. He later reprised this role for the music video of Walking on Broken Glass by Annie Lennox.

Malkovich starred in the 1992 film adaptation of John Steinbeck's award-winning novella Of Mice and Men as Lennie alongside Gary Sinise as George. In 1994, he was nominated for another Oscar, in the same category, for In the Line of Fire. Though he played the title role in the Charlie Kaufman-penned Being John Malkovich, he played a slight variation of himself, as indicated by the character's middle name of "Horatio". Malkovich has a cameo in the movie Adaptation.also written by Kaufmanappearing as himself during the filming of Being John Malkovich. The Dancer Upstairs, Malkovich's directorial film debut, was released in 2002. Recent film roles include The Hitchhiker's Guide to the Galaxy, Beowulf, Burn After Reading and Changeling.

In a 2008 interview on College Hour, Malkovich revealed that he has been discussing making a motion picture adaptation of the Arnon Grünberg novel The History of My Baldness.[12]

In November 2009, Malkovich appeared in an advertisement for Nespresso with fellow actor George Clooney. He portrayed Quentin Turnbull in the film adaption of Jonah Hex.[13] Malkovich was due to play the role of The Vulture in Spider-Man 4, but the project was canceled in January 2010.

Malkovich is known for his distinctive voice, which The Guardian describes as "a reedy, faintly orgasmic drawl".[14]

Malkovich was married to Glenne Headly from 1982 to 1988. They divorced after Malkovich became involved with Michelle Pfeiffer, his co-star in Dangerous Liaisons.[11] He later met his long-term partner Nicoletta Peyran on the set of The Sheltering Sky where she was the second assistant director, in 1989. They have two children; Amandine (born 1990) and Loewy (born 1992).

Malkovich is a conservative. Actor William Hootkins, who worked with Malkovich in BBC Television's Rocket to the Moon, stated, "In fact, he's so right-wing you have to wonder if he's kidding."[11]

In a 2002 appearance at the Cambridge Union Society, when asked whom he would most like to "fight to the death," Malkovich replied that he would "rather just shoot" journalist Robert Fisk and British MP George Galloway.[15] Fisk reacted with outrage.[16] When interviewed by The Observer, Malkovich elaborated on his comments: "I hate somebody who is supposed to be a Middle Eastern expert who thinks Jesus was born in Jerusalem. I hate what I consider his vile anti-semitism. This being said, I apologize to both Fisk and Galloway; they seem like good men but if they make such a heinous mistake again, I will not hesitate to murder them brutally by way of the gallows." Malkovich later added: "I'm a Christopher Hitchens fan myself, but no one has thinner skins than journalists, in my experience, and I come from a family of them... They can dish it out but they can't take it. But the reason I don't like the topic, why I don't really say anything about a whiner like Fisk, is it gives them more oxygen."[17]

Malkovich is fluent in French and for nearly 10 years, lived and worked in a theater in southern France. He and his family left France in a dispute over taxes in 2003,[11][17] and since then he has lived in Cambridge, Massachusetts.[18] In a 2008 interview on The Late Show With David Letterman, Malkovich said he had just spent five weeks that summer living in France.

In April 2005, while speaking at Illinois State, Malkovich was awarded his bachelor's degree in theatre. When attending the university as a student in the 1970s, he failed to take his last remaining graduation requirement, a test on the United States Constitution; this requirement was waived for Malkovich.

Malkovich lost millions[19] to Bernard Madoff's Ponzi scheme when it collapsed in 2008.[20]

This article uses material from the article John Malkovich from the free encyclopedia Wikipedia and it is licensed under the GNU Free Documentation License.