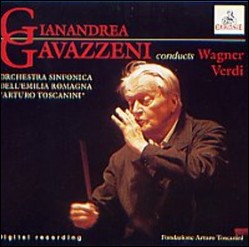 Gavazzeni was born in Bergamo. For almost 50 years, starting from 1948, he was principal conductor at La Scala, Milan, in 1966-68 being its music and artistic director.

He had his Metropolitan Opera debut on 11 October 1976. He conducted eight performances of Giuseppe Verdi's Il trovatore that year at the Met.[1]

His compositions include: concertos such as 'Concerto bergamasco'; 'The Song of St Alexander'; and sonatas.

His last wife was the soprano Denia Mazzola-Gavazzeni.[2] In January 1993, at age 83, he conducted Jules Massenet's Esclarmonde at Teatro Massimo di Palermo, with his wife singing the title role. It was the first time he had conducted this opera.[3]

This article uses material from the article Gianandrea Gavazzeni from the free encyclopedia Wikipedia and it is licensed under the GNU Free Documentation License.

The End Of Camelot Peter Cetera
Update Required To play the media you will need to either update your browser to a recent version or update your Flash plugin.