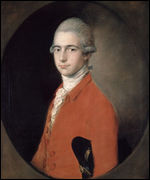 born in May 1756 in Bath, England, United Kingdom

Thomas (Tom) Linley the younger (May 7, 1756 August 5, 1778) was the eldest son of the composer Thomas Linley the elder and his wife Mary Johnson. He was one of the most precocious composers and performers that have been known in England, and became known as the "English Mozart".[1]

Linley's abilities were apparent from a young age. He played a concerto at a concert in Bristol on 29 July 1763, at the age of 7, and from 1763 to 1768 was apprenticed to Dr. William Boyce, the Master of the King's Musick. In 1767 he appeared with his sister Elizabeth Ann Linley in a London production of The Fairy Favour, singing, dancing a hornpipe and playing the violin. Between 1768 and 1771) he journeyed to Italy to study violin and composition with Nardini in Florence. There he met Wolfgang Amadeus Mozart in April 1770, and Charles Burney in September of the same year.[1] In reference to Linley, Burney later wrote,"The 'Tommasino', as he is called, and the little Mozart, are talked of all over Italy, as the most promising geniuses of this age." [2] (Thomas and Mozart - both aged 14 in 1770 - had met and become warm friends earlier in 1770).

On his return to England he performed in the concerts directed by his father in Bath and at various oratorios at the Drury Lane, of which he was leader between 1773 to 1778.

A significant amount of Linley's compositions have been lost including many in the Drury Lane Fire of 1809. Surviving works attest to his congenial mastery of melody, gift for counterpoint, and musical imagination.[1] Linley composed violin sonatas and concertos as well as choral works, and provided most of the music for his brother-in-law Richard Brinsley Sheridan's opera The Duenna (1775). Among his surviving works are an "Ode on the Spirits of Shakespeare", the Lyric Ode (1776), set to a text by his fellow-Bathonian French Laurence, and an oratorio entitled The Song of Moses. Linley also assisted his father, and their works (cantatas, madrigals, elegies and songs) were published together in two volumes.

Linley was drowned in a boating accident at the age of 22, while staying at Grimsthorpe Castle in Lincolnshire with his sister Mary. He is buried at Edenham Parish Church. Linley's early death was immediately recognised as a tragedy for English music. For his part, Mozart later told fellow musician Michael Kelly that "Linley was a true genius" who "had he lived, would have been one of the greatest ornaments of the musical world".

This article uses material from the article Thomas Linley the younger from the free encyclopedia Wikipedia and it is licensed under the GNU Free Documentation License.

Blazing Heart Steve Thomson
Update Required To play the media you will need to either update your browser to a recent version or update your Flash plugin.