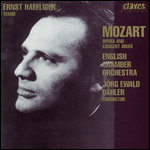 Haefliger was born in Davos, Switzerland and studied at the Zürich Conservatory. He studied with Fernando Capri in Geneva and Julius Patzak in Vienna.

In 1943, Haefliger sang for the first time the Evangelist in Bach's St John Passion in Zurich. After this debut he was engaged for several concerts in Switzerland and after World War II abroad. He soon won the attention of Ferenc Fricsay, who engaged him for the Salzburg Festival where Haefliger's world career started in 1949 with the role of Terasias in Carl Orff's opera Antigonae.

In 1952, he responded to the call of Ferenc Fricsay and joined him at the Deutsche Oper Berlin where he sang the tenor parts in all Mozart operas, in Rossini's The Barber of Seville and Le comte Ory, in Hans Pfitzner's Palestrina, the part of Hans in Smetana's The Bartered Bride, as well as many other tenor parts.

He had a lengthy and extensive international career and recorded many oratorios and operas. From 1971 to 1988, he taught at the Staatliche Hochschule für Musik in Munich, Germany. Haefliger made his Boston debut in 1965 for the Peabody Mason Concert series.[1][2]

Haefliger also gave master classes in Zurich, Japan and in the United States.

Haefliger died from acute heart failure on 17 March 2007, in Davos. The pianist, Andreas Haefliger, is his son.

This article uses material from the article Ernst Haefliger from the free encyclopedia Wikipedia and it is licensed under the GNU Free Documentation License.