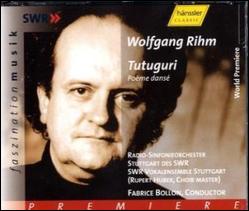 Wolfgang Rihm (born 13 March 1952 in Karlsruhe) is a German composer.

Rihm is Head of the Institute of Modern Music at the Karlsruhe Conservatory of Music and has been composer in residence at the Lucerne Festival and the Salzburg Festival. He was honoured as Officier of the Ordre des Arts et des Lettres in 2001.

Rihm finished both his school and his studies in music theory (with Hans H. Eggebrecht) in 1972, two years before the premiere of his early work Morphonie at the 1974 Donaueschingen Festival launched his career as a prominent figure in the European new music scene. Rihm's early work, combining contemporary techniques with the emotional volatility of Mahler and of Schoenberg's early expressionist period, was regarded by many as a revolt against the avant-garde generation of Boulez, Stockhausen (with whom he studied in 197273), and others, and led to a large number of commissions in the following years. In the late 1970s and early 1980s his name was associated with the movement called New Simplicity. His work still continues to plough expressionist furrows, though the influence of Luigi Nono, Helmut Lachenmann and Morton Feldman, amongst others, has affected his style significantly.

Rihm is an extremely prolific composer, with hundreds of completed scores, a large portion of which are yet to be commercially recorded. (Vide the List of the compositions of Wolfgang Rihm, in German, or the IRCAM works list, in French.) He does not always regard a finished work the last word on a subject—for example the orchestral work Ins Offene... (1990) was completely rewritten in 1992, and then used as the basis for his piano concerto Sphere (1994), before the piano part of Sphere was recast for the solo piano work Nachstudie (also 1994). (In 2002 Rihm also produced a new version of Nachstudie, Sphäre nach Studie, for harp, two double basses, piano and percussion, and also a new version of Sphere, called Sphäre um Sphäre, for two pianos and chamber ensemble.) Other important works include twelve string quartets, the operas Die Hamletmaschine (1983-1986, text by Heiner Müller) and Die Eroberung von Mexico (1987-1991, based on texts by Antonin Artaud), over twenty song-cycles, the oratorio Deus Passus (1999-2000) commissioned by the Internationale Bachakademie Stuttgart, the chamber orchestra piece Jagden und Formen (1995-2001) and a series of related orchestral works bearing the title Vers une symphonie fleuve. The New York Philharmonic premièred Rihm's 2004 commission Two Other Movements.

Invited by Walter Fink, he was the fifth composer featured in the annual Komponistenporträt of the Rheingau Musik Festival in 1995, in two programs of chamber music and Lied, also of Robert Schumann, including his works Fremde Szene I for piano trio, Vier Lieder after poems of Paul Celan, Klavierstück 7, Klavierstück 6, Das Rot, six songs after poems of Karoline von Günderrode, Antlitz for violin and piano, and Fremde Szene III. In 1995 he contributed Communio (Lux aeterna) to the Requiem of Reconciliation. In 2003 he received the Ernst von Siemens Music Prize.

In March 2010 the BBC Symphony Orchestra featured the music of Rihm in one of their 'total immersion' weekends at the Barbican Centre, London. Recordings from this weekend were used for three 'Hear and Now' programmes on BBC Radio 3 dedicated to his work.[1] On July 27, 2010, Rihm's latest opera, Dionysus, based on Nietzsches late cycle of poems Dionysus-Dithyrambs, had its world premiere at the Salzburg Festival, conducted by Ingo Metzmacher, and designed by Jonathan Meese.[2] This performance was voted World Premiere of the Year (Uraufführung des Jahres) for 2010/11 by Opernwelt magazine[3]. He revised his Gegenstück (2006) for bass saxophone, percussion and piano, premiered on 16 August 2010 to celebrate the 80th birthday of Walter Fink.[4] Anne-Sophie Mutter premiered his violin concerto Lichtes Spiel (Light Games) in Avery Fisher Hall with the New York Philharmonic on 18 November 2010.[5]

This article uses material from the article Wolfgang Rihm from the free encyclopedia Wikipedia and it is licensed under the GNU Free Documentation License.