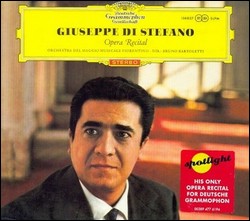 Giuseppe Di Stefano (24 July 1921 – 3 March 2008) was an Italian operatic tenor, one of the most beautiful voices who sang professionally from the mid 1940s until the early 1990s. He was known as the "Golden voice" or "The most beautiful voice", as the true successor of Beniamino Gigli. Luciano Pavarotti said he modeled himself after Di Stefano. In an interview Pavarotti said "Di Stefano is my idol. There is a solar voice...It was the most incredible, open voice you could hear. The musicality of di Stefano is as natural and beautiful as the voice is phenomenal".[1] Di Stefano was also the tenor who most inspired José Carreras.[2]

Giuseppe Di Stefano was born in Motta Sant'Anastasia, a village near Catania, Sicily, in 1921.[3] He was the only son of a carabiniere turned cobbler and his dressmaker wife. Di Stefano was educated at a Jesuit seminary and briefly contemplated entering the priesthood.

After serving in the Italian military (and briefly taking lessons from the Swiss tenor Hugues Cuénod), Di Stefano made his operatic debut in 1946 in Reggio Emilia as Des Grieux in Massenet's Manon, the role in which he made his La Scala debut the following year. He made his New York debut at the Metropolitan Opera in February 1948 as the Duke of Mantua in Verdi's Rigoletto [4] after singing the role in Riccione with Hjördis Schymberg in August of the previous year. After his performance in Manon a month later, Musical America wrote that Di Stefano "had the rich velvety sound we have seldom heard since the days of Gigli". [5] He went on to perform regularly in New York for many years. In 1957, Di Stefano made his British debut at the Edinburgh Festival as Nemorino in L'elisir d'amore and his Royal Opera House, Covent Garden, debut in 1961, as Cavaradossi in Tosca.

As a singer, Di Stefano was admired for his excellent diction, unique timbre, passionate delivery and, in particular, for the sweetness of his soft singing. In his Metropolitan Opera radio broadcast debut in Faust, he attacked the high C forte and then softened to a pianissimo. Sir Rudolf Bing said in his memoirs, "The most spectacular single moment in my observation year had come when I heard his diminuendo on the high C in "Salut! demeure" in Faust: I shall never as long as I live forget the beauty of that sound".[6]

During his years of international celebrity, Di Stefano won a gold Orfeo, an Italian musical award.[7]

In 1953 Walter Legge, leader of EMI's classical wing, wanted a tenor to record all the popular Italian operas with Maria Callas, and chose Di Stefano. Among their recording achievements was the famous 1953 studio recording of Tosca under Victor de Sabata, which is considered "as being one of the great performances in the history of the gramophone". [8] The two also performed together on stage frequently, from 1951 in South America to the end of 1957 in Un ballo in maschera at La Scala, the last time the two collaborated in an opera. He sang Alfredo in the famous Visconti production of La traviata in 1955 at La Scala, as well as Edgardo to her Lucia under Herbert von Karajan at La Scala, Berlin and Vienna.

In 1973, Di Stefano and Maria Callas went together for a recital tour that ended in 1974: critics remarked that Maria Callas had lost her voice, but the public reaction was nevertheless enthusiastic everywhere. It was during this period that there were rumors of a brief romantic relationship between the two singers. Di Stefano continued to sing successfully and his final operatic role was as the Emperor in Turandot, in July 1992.

In November 2004, Di Stefano was critically injured in his home in Diani Beach, Kenya, after a brutal beating by unknown assailants.[3][7] He was ambushed in his car with his wife, Monika Curth, as they prepared to drive from their villa in Diani, a coastal resort near Mombasa on the Indian Ocean. The singer was still unconscious a week after the attack and was fed intravenously, and underwent several operations.

After two surgeries in Mombasa, Di Stefano was flown to the San Raffaele clinic at Milan in December 2004, where he slipped into a coma.[9] Eventually he awakened from coma, but his health never fully improved.[3] He died in his home in Santa Maria Hoè, north of Milan, on 3 March 2008 at the age of 86.[3]

Di Stefano and Maria Callas recorded many operas together, all of which for EMI. Together they recorded the following complete operas:

A series of duets with Di Stefano and Callas was recorded by the Philips label in the period November–December 1972, with Antonio de Almeida conducting the London Symphony Orchestra. These recordings were not published officially, but a 'pirate' version did appear.

Fortunately, he also made many other recordings with other wonderful singers, complete EMI sets of Madama Butterfly (opposite Victoria de los Ángeles, 1954) and La traviata (with Antonietta Stella and Tito Gobbi, 1955).

For Ricordi (Ricordi MRO 104/105), he made a complete stereo Lucia di Lammermoor with Renata Scotto, Ettore Bastianini and Ivo Vinco in 1958, with Nino Sanzogno conducting the Orchestra and Chorus of La Scala, Milan.

In 1995, VAI issued an approved version of La bohème, from a 1959 performance in New Orleans, with the tenor starring opposite Licia Albanese, Audrey Schuh, Giuseppe Valdengo and Norman Treigle. Additionally, in 1962 the tenor recorded excerpts from Massenet's Manon, with Anna Moffo, conducted by René Leibowitz.

In 1951, Di Stefano sang in a performance of Verdi's Requiem, at Carnegie Hall, conducted by Arturo Toscanini, the other soloists being Herva Nelli, Fedora Barbieri and Cesare Siepi. It was released as a recording by RCA.

This article uses material from the article Giuseppe Di Stefano from the free encyclopedia Wikipedia and it is licensed under the GNU Free Documentation License.

It's Alright (Baby's Coming Back) Eurythmics
Update Required To play the media you will need to either update your browser to a recent version or update your Flash plugin.