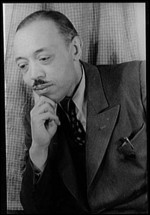 Still's mother moved with him to Little Rock, Arkansas, where she taught high school English for 33 years. She met and married Charles B. Shepperson, who nurtured his stepson William's musical interests by taking him to operettas and buying Red Seal recordings of classical music, which the boy greatly enjoyed. The two attended a number of performances by musicians on tour.

Still grew up in Little Rock, and started violin lessons at age 15. He taught himself to play the clarinet, saxophone, oboe, double bass, cello and viola, and showed a great interest in music. His maternal grandmother sang African-American spirituals to him. At age 16 he graduated from M. W. Gibbs High School in Little Rock.

His mother wanted him to go to medical school, so Still pursued a Bachelor of Science degree program at Wilberforce University, a historically black college in Ohio. Still became a member of Kappa Alpha Psi fraternity. He conducted the university band, learned to play various instruments, and started to compose and to do orchestrations.

Still was awarded scholarships to study at the Oberlin Conservatory of Music with Friedrick Lehmann and with George Whitefield Chadwick. He also studied with the modern composer Edgard Varèse.

In 1918, Still joined the United States Navy to serve in World War I. Between 1919 and 1921, Still worked as an arranger for W.C. Handy's band and later played in the pit orchestra for Noble Sissle and Eubie Blake's musical, Shuffle Along. Later in the twenties, he served as the arranger of Yamekraw, a "Negro Rhapsody" composed by the noted Harlem Stride pianist, James P. Johnson.

In 1934, Still received his first Guggenheim Fellowship; he started work on the first of his eight operas, Blue Steel. In 1949 his opera Troubled Island, originally completed in 1939, about Jean Jacques Dessalines and Haiti, was performed by the New York City Opera. It was the first opera by an African American to be performed by a major company.

Still moved to Los Angeles, California in the 1930s, where he arranged music for films. These included Pennies from Heaven (the 1936 film starring Bing Crosby and Madge Evans) and Lost Horizon (the 1937 film starring Ronald Colman, Jane Wyatt and Sam Jaffe). For Lost Horizon, he arranged the music of Dimitri Tiomkin. Still was also hired to arrange the music for the film Stormy Weather, but left the assignment after a few weeks due to artistic disagreements.

He was the first African American to have an opera performed on national United States television when Bayou Legend, completed in 1941, premiered on PBS in . Additionally, he was the recording manager of the Black Swan Phonograph Company.

This article uses material from the article William Grant Still from the free encyclopedia Wikipedia and it is licensed under the GNU Free Documentation License.

Moon Flares
Update Required To play the media you will need to either update your browser to a recent version or update your Flash plugin.