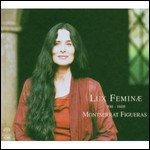 Montserrat Figueras i García (Catalan: [munsrat fies i rsi.]; 1942-2011) was a Catalan soprano who specialized in early music.

Figueras was born 15 March 1942 in Barcelona, Spain.[1][2] After initially training as an actress, in 1966 she began studying early singing techniques together with her sister Pilar Figueras and developed an approach and technique for singing early music which combined historical fidelity with vitality.[3][4]

In 1974 she and Jordi Savall, her husband since 1968, Lorenzo Alpert and Hopkinson Smith formed Hespèrion XX, an early music ensemble. Figueras and her husband were members of a newer version of that ensemble, Hespèrion XXI. They also founded the groups La Capella Reial de Catalunya and Le Concert des Nations.

Figueras also performed and recorded regularly as a solo artist. She and her husband performed with their children: daughter Arianna and son Ferran.[5]

She died on 23 November 2011 in Cerdanyola del Vallès, surrounded by her family, after a long battle with cancer.[6][7] The funeral was held at the Monastery of Pedralbes in Barcelona.[8]

This article uses material from the article Montserrat Figueras from the free encyclopedia Wikipedia and it is licensed under the GNU Free Documentation License.

47 Millionaires 77 Bombay Street
Update Required To play the media you will need to either update your browser to a recent version or update your Flash plugin.