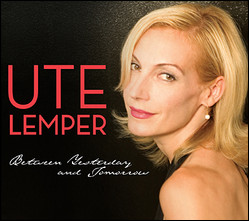 born on 4/7/1963 in Münster, Nordrhein-Westfalen, Germany

Ute Lemper (born 4 July 1963) is a German chanteuse and actress renowned for her interpretation of the work of Kurt Weill.

Born in Münster, Germany, Ute Lemper joined the punk music group known as the Panama Drive Band at the age of 16. Later, she graduated from the Dance Academy in Cologne and the Max Reinhardt Seminary Drama School in Vienna.[1]

Her diverse credits include musicals, such as her breakthrough role in the original Viennese cast of Cats, the title role in Peter Pan, a recreation of the Marlene Dietrich-created Lola in The Blue Angel, the original European Sally Bowles in a Paris production of Cabaret, and the original London revival Velma Kelly in Chicago. She also dubbed the voice of Ariel in Disney's The Little Mermaid for German-speaking audiences.

Lemper, named Billboard's Crossover Artist of the Year for 1993/1994, is a prolific recording artist, appearing on numerous cast recordings and compilation concerts, including Roger Waters' The Wall concert in 1990. As a solo artist, her extensive discography includes ubiquitously well-reviewed interpretations of Kurt Weill's compositions from the late 1980s, in addition to German cabaret songs, which were very political songs sung in underground locations in 1930s Berlin and elsewhere. She recorded Illusions in 1992, devoted to the songs of Marlene Dietrich and Édith Piaf. She has numerous pop albums, variously in English, French, and German, and 2000s lauded modern Punishing Kiss. Punishing Kiss featured songs written especially for her by the likes of Scott Walker, Nick Cave, Tom Waits, Elvis Costello, Philip Glass, and Neil Hannon, the latter of whom performed with her on two of the album's tracks. Lemper is known for wild interpretations on discs like the Sondheim tribute City of Strangers, containing a particularly mannered version of the Elaine Stritch-popularized song "The Ladies Who Lunch". In 1998, a Lemper compilation, All That Jazz: The Best of Ute Lemper, was released. In 2003 and 2006 Lemper's songwriting talents were shown on her discs from those years as she moved from being an interpretive singer to a singer/songwriter.

A painter in the neoclassical style, Lemper's paintings have been showcased in numerous galleries.

She starred as Marie Antoinette for L'Autrichienne (1989, directed by Pierre Granier-Deferre), and subsequently appeared in films such as Prorva, Bogus, Jean Galmot, aventurier, Prospero's Books, Appetite and Prêt-à-Porter (in the latter appearing in a well-publicised nude scene filmed while she was pregnant, and she received National Board of Review for Ensemble Cast award). She has contributed to the soundtracks of numerous films, including The Voyager, Kissing Jessica Stein and Appetite.

Lemper, a mother of three, resides on the Upper West Side section of Manhattan in New York City. She performs worldwide, recently even in the war-torn Middle East. Her autobiography was published in Berlin in 1995.[2] She has also authored several journal articles.

This article uses material from the article Ute Lemper from the free encyclopedia Wikipedia and it is licensed under the GNU Free Documentation License.

Sleeping Satellite Tasmin Archer
Update Required To play the media you will need to either update your browser to a recent version or update your Flash plugin.