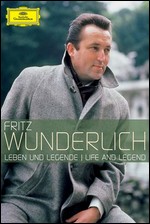 Friedrich "Fritz" Karl Otto Wunderlich (September 26, 1930 September 17, 1966) was a German lyric tenor, famed for his singing of the Mozart repertory and Italian, German opera, and lieder. He died in an accident when he was only 35.

Wunderlich was born in Kusel in the Palatinate. His mother was a violinist and his father was a choir-master. For a short time, the family kept the inn "Emrichs Bräustübl" (Emrich's Brewing Cottage). Fritz's father lost his job due to pressure imposed upon him by local Nazis, in addition to suffering from a severe battlefield injury. He committed suicide when Fritz was five years old.

The story regarding Wunderlich's discovery parallels many of his contemporaries (notably Nicolai Gedda and Dietrich Fischer-Dieskau). As a young man, Wunderlich worked in a bakery. At the insistence of neighbors and passers-by who had witnessed his musical gifts and beautiful voice, Wunderlich decided to begin studies in music. He managed to obtain a scholarship in order to pursue his studies at the Freiburg Music Academy where he studied French horn and voice.

Wunderlich was soon noted as a brilliant young tenor, especially in Mozartian roles, but he later expanded his reach to the full range of the lyric tenor repertoire.

He occasionally sang minor Wagner roles such as the steersman in The Flying Dutchman, Walther von der Vogelweide in Tannhäuser, and the shepherd in Tristan und Isolde.

It was the fashion during Wunderlich's career for German theatres to perform operas in the local rather than original language. Therefore, most of his recordings of the standard operatic repertoire are sung in German, including Verdi's Rigoletto and Don Carlos. (He sang his recording of the Verdi Requiem in distinctly Germanic Latin.) Wunderlich achieved the highest distinction within the German repertory. Of special importance is a recording of Mozart's The Magic Flute, conducted by Karl Böhm, in which Wunderlich gave a critically acclaimed performance as Prince Tamino,[1] opposite baritone Dietrich Fischer-Dieskau in the role of Papageno.

Wunderlich's crystal-clear voice and intelligent, restrained interpretation also led him to impressive renditions of the lieder cycles of Schubert and Schumann with pianist Hubert Giesen. His famous recording of Schumann's Dichterliebe remains a gold standard of this genre. Many tenors since have emulated Wunderlich's interpretation of this cycle.

At the time of his death, he had been recording Haydn's The Creation, with the Berlin Philharmonic and the Wiener Singverein under Herbert von Karajan with other soloists Christa Ludwig, Gundula Janowitz, Walter Berry and Fischer-Dieskau. Wunderlich had completed recording his arias, but Werner Krenn was hired to record the recitatives. Several recorded live performances of Wunderlich singing the whole part, under Karajan, survive.

Available videos include a full-length performance (in German) as Count Almaviva in The Barber of Seville, and a recital of operatic arias.

Wunderlich sang at the 1966 Salzburg Festival, but two weeks later his promising career was cut short by an accident while he was on a hunting vacation (his hobbies included hunting, guns, and fast cars). He fell from a stairway in a friend's country house in Oberderdingen near Maulbronn, and died in the University Clinic of Heidelberg just days before his 36th birthday. He is buried in Munich's Waldfriedhof cemetery.

This article uses material from the article Fritz Wunderlich from the free encyclopedia Wikipedia and it is licensed under the GNU Free Documentation License.