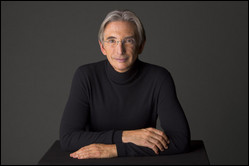 Tilson Thomas was born in Los Angeles, California, to Ted and Roberta Thomas, a Broadway stage manager and a middle school history teacher respectively. He is the grandson of noted Yiddish theater stars Boris and Bessie Thomashefsky, who performed in the Yiddish Theater District in Manhattan. The family talent goes back to Tilson Thomas's great-grandfather, Pincus, an actor and playwright, and before that to a long line of cantors; his father, Theodor Herzl Tomashefsky, was a poet and painter. He was an only child and a prodigy.[1] Tilson Thomas studied piano with John Crown and composition and conducting under Ingolf Dahl at the University of Southern California. As a student of Friedelind Wagner, Tilson Thomas was a Musical Assistant and Assistant Conductor at the Bayreuth Festival.

Tilson Thomas is openly gay and lives in San Francisco with his partner of thirty years, Joshua Robison.[2][3][4] The couple married on November 2, 2014.[5]

Tilson Thomas has conducted a wide variety of music and is a particular champion of modern American works. He is also renowned for his interpretation of the works of Gustav Mahler; he has recorded all nine Mahler symphonies and other major orchestral works with the San Francisco Symphony. These recordings have been released on the high-resolution audio format Super Audio CD on the San Francisco Symphony's own recording label. Tilson Thomas is also known as a premier interpreter of the works of Aaron Copland, Charles Ives, and Steve Reich.

Tilson Thomas has also been devoted to music education. He leads a series of education programs titled Keeping Score which offers insight into the lives and works of great composers, and led a series of Young People's Concerts with the New York Philharmonic. Tilson Thomas founded the New World Symphony in Miami in 1987. Most recently, Tilson Thomas has led two incarnations of the YouTube Symphony Orchestra, which brings young musicians from around the world together for a week of music making and learning.

Presently, Tilson Thomas is connecting tangibly with his past. He is president of the Tomashefsky Project, a $2 million undertaking formed in 2017 that will record and preserve his grandparents' theatrical achievements. "There are 2,000 to 3,000 documents out there on Boris and Bessie and Yiddish theater" says Linda Steinberg, founding executive director of the project. In the New York Public Library alone there are 700 - and nobody's looked at them." Other major collections are in the library of Congress and the University of California at Berkeley, Harvard, Stanford and Brandeis. These include original manuscripts, plays, sheet music, posters, playbills, photographs, as well as costumes and props"

From 1968 to 1994, Tilson Thomas was the Music Director of the Ojai Music Festival seven different times. After winning the Koussevitzky Prize at Tanglewood in 1969, Tilson Thomas was named Assistant Conductor of the Boston Symphony Orchestra. That same year, he made his conducting debut with the Boston Symphony Orchestra, replacing an unwell William Steinberg mid-concert and thereby coming into international recognition at the age of 24. He stayed with the Boston Symphony as an assistant conductor until 1974 and made several recordings with the orchestra for Deutsche Grammophon. He was music director of the Buffalo Philharmonic Orchestra from 1971 to 1979, and recorded for Columbia Records with the orchestra.[10] Between 1971 and 1977, he also conducted the series of Young People's Concerts with the New York Philharmonic. From 1981 to 1985, he was principal guest conductor of the Los Angeles Philharmonic Orchestra. During a performance of Mahler's Eighth Symphony at the Hollywood Bowl, a helicopter flew over the venue, disrupting the concert. This is when Tilson Thomas famously stormed offstage in the middle of the performance. In 2007, he returned to the Hollywood Bowl leading the Los Angeles Philharmonic again in Mahler 8, announcing jokingly, "Now where were we?". He returned in 2013 with Mahler's Second Symphony, when another helicopter flew over the venue. Tilson Thomas stopped the orchestra, but then resumed the performance.

In 1987, Tilson Thomas founded the New World Symphony in Miami Beach, Florida, an orchestral academy for gifted young musicians whose stated mission is "to prepare highly-gifted graduates of distinguished music programs for leadership roles in orchestras and ensembles around the world."[11] He is currently the academy's artistic director. He played an instrumental role in the development of the Frank Gehry-designed New World Center in Miami Beach, which opened in 2011.[12] (The two had personal history, with Gehry sometimes having baby-sat for Tilson Thomas back when both were growing up in Los Angeles.[12])

From 1988 to 1995, Tilson Thomas was principal conductor of the London Symphony Orchestra (LSO), and recorded with them for such labels as Columbia (now Sony Classical), including the Symphony No 3 of Mahler. Since 1995, he has held the title of principal guest conductor with the LSO.

San Francisco and on

Tilson Thomas became the San Francisco Symphony's 11th Music Director in 1995. He originally made his debut with the orchestra in January 1974 conducting Mahler's Symphony No. 9. During his first season with the San Francisco Symphony, Tilson Thomas included a work by an American composer on nearly every one of his programs, including the first performances ever by the orchestra of music by Lou Harrison, and culminated with "An American Festival," a two-week focus on American music.[13] In June 2000, Michael Tilson Thomas and the San Francisco Symphony presented a landmark 12-concert American Mavericks Festival, recognizing the innovative works of 20th century American composers. Additional season-ending festivals in Davies Symphony Hall have included explorations of the music of Wagner, Prokofiev, Mahler, Stravinsky, Beethoven and Weill, including semi-staged productions of Rimsky-Korsakov's opera-ballet Mlada, Beethoven's Fidelio, and Wagner's The Flying Dutchman. During his tenure, the orchestra began to issue recordings on its own SFS Media label. In October 2017, the orchestra announced that Tilson Thomas is to conclude his tenure as its music director at the close of the 2019-2020 season, and subsequently to take the title of music director laureate.[14][13]

In April 2005, he conducted the Carnegie Hall premiere of The Thomashefskys: Music and Memories of a Life in the Yiddish Theater, partly as a tribute to his own grandparents.[15] Other American orchestras have since performed this production, including the Chicago Symphony Orchestra, LA Philharmonic, Boston Symphony Orchestra, Philadelphia Orchestra, New York Philharmonic, New World Symphony and San Francisco Symphony. It has also been recorded for future broadcast on PBS.[16]

Tilson Thomas joined up with YouTube in 2009 to help create the YouTube Symphony Orchestra, an orchestra whose members were selected from 30 countries based on more than 3,000 video auditions on YouTube. The Orchestra, as well as such soloists as Mason Bates, Measha Brueggergosman, Joshua Roman, Gil Shaham, Yuja Wang, Anna Larsen, Charlie Lui, and Derek Wang, participated in a classical music summit in New York City at the Juilliard School over three days. The event culminated in a live concert at Carnegie Hall on Wednesday, April 15. The concert was later made available on YouTube.[17] On March 20, 2011 Tilson Thomas also conducted the "YTSO2" (YouTube Symphony Orchestra 2) in Sydney Australia.[18]

His first television appearances were in the CBS Young People's Concerts with the New York Philharmonic, airing from 1971–1977.[19] He has also made regular appearances on PBS, with broadcasts featuring Tilson Thomas airing from 1972 through 2008. Eight episodes of WNET's Great Performances series have featured Tilson Thomas. He has also been featured on Japan's NHK and the UK's BBC many times in the last three decades.

In 2011 he hosted a concert stage show celebrating his grandparents and the music of American Yiddish theatre The Thomashefskys: Music and Memories of a Life in the Yiddish Theater, which aired in 2012 on the PBS series "Great Performances." [20]

This article uses material from the article Michael Tilson Thomas from the free encyclopedia Wikipedia and it is licensed under the GNU Free Documentation License.

Julia Chris Rea
Update Required To play the media you will need to either update your browser to a recent version or update your Flash plugin.