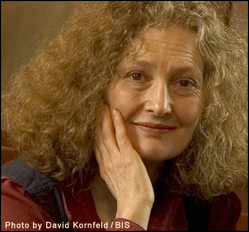 Dame Carolyn Emma Kirkby, DBE (born 26 February 1949) is an English soprano and one of the world's most renowned early music specialists. She has sung on over 100 recordings.[1]

Her entry in The Grove Book of Opera Singers (2008) reads:

Her uncommonly pure, crystalline voice, deployed with minimal vibrato, her natural declamation, agile coloratura and her sensitivity to words have been widely admired by interpreters of early, Renaissance and Baroque music and have served as a model for many specialists in this repertory.[2]

She was appointed a Dame Commander of the Order of the British Empire in the 2007 Queen's Birthday Honours List.

Kirkby was educated at Hanford School[3] and Sherborne School for Girls in Dorset. Her father was Geoffrey John Kirkby, a Royal Navy Officer.

Initially, Kirkby had no expectations of becoming a professional singer. As a classics student at Somerville College, Oxford and a schoolteacher she sang for pleasure in choirs and small groups, notably Schola Cantorum of Oxford, preferring the Renaissance and Baroque repertoires. As her voice was not particularly large, Kirkby's potential as a soloist was not immediately recognised.

Kirkby was a founding member of the Taverner Choir, and in 1973 began her long association with the Consort of Musicke. She took part in the early Decca Florilegium recordings with both the Consort of Musicke and the Academy of Ancient Music, at a time when most college-trained sopranos were not developing a vocal sound appropriate for early music. She found her own approach, with help from Jessica Cash in London, and from the directors, fellow singers and instrumentalists with whom she worked.

Kirkby has built long term relationships with chamber groups and orchestras, in particular London Baroque, the Freiburger Barockorchester, L’Orfeo (of Linz) and the Orchestra of the Age of Enlightenment, and now with some of the younger groups – the Palladian Ensemble and Florilegium. She has been the Patron of Derby Choral Union since 1993.

She taught for many years at Dartington International Summer School, the Guildhall School of Music & Drama, as well as the Bel Canto Summer School. In 2010 she became President of Dartington Community Choir. In 1994, she was awarded an Honorary Degree (Doctor of Music) from the University of Bath.[4]

Kirkby has made well over 100 recordings, from sequences of Hildegard of Bingen to madrigals of the Italian and English Renaissance, cantatas and oratorios of the Baroque, works of Mozart, Haydn and Johann Christian Bach. Her 1980 recording of Handel's Messiah conducted by Christopher Hogwood brought her international acclaim. The recording was later named one of the top 20 recordings of all time by BBC Music Magazine.[5]

Other recordings include: Handel: Opera Arias and Overtures 2 for Hyperion, Johann Sebastian Bach wedding cantatas for Decca, Bach Cantatas 82a and 199 for Carus; and four projects for BIS: with London Baroque, one of Handel motets and one of Christmas music by Scarlatti, Bach and others; with the Royal Academy Baroque Orchestra the first recording of the newly rediscovered Gloria by Handel; and with the Romantic Chamber Group of London, Chanson d'amour, an album of songs by the American composer Amy Beach.

In the 2000s: an anthology, Classical Kirkby, devised and performed with Anthony Rooley, on the BIS label, 2002; Cantatas by Cataldo Amodei, also for BIS, 2004; with Fretwork, consort songs by William Byrd, for Harmonia Mundi USA, 2005.; Scarlatti Stabat Mater with Daniel Taylor, for ATMA, 2006; Honey from the Hive, songs of John Dowland, with Anthony Rooley, for BIS, 2006: and Musique and Sweet Poetrie, also for BIS, 2007; lute songs from Europe with Jakob Lindberg.

In 1999 Kirkby was voted 'Artist of the Year' by Classic FM Radio listeners and in November 2000 she received the Order of the British Empire. BBC Music Magazine in April 2007 published a survey of critics to nominate "The 20 greatest sopranos", controversially placing Kirkby at number 10.[6]

On 21 January 2011 it was announced that Kirkby had been awarded the Queen's Medal for Music,[7] an award funded by the Privy Purse and given to an individual who has had a major influence on the musical life of the nation.[8]

From 1971-83 she was married to conductor Andrew Parrott. She was later in a long-term relationship with lutenist Anthony Rooley, with whom she has a son. On 30 April 2015 she married conductor Howard Williams.

This article uses material from the article Emma Kirkby from the free encyclopedia Wikipedia and it is licensed under the GNU Free Documentation License.

Mr. Jones Counting Crows
Update Required To play the media you will need to either update your browser to a recent version or update your Flash plugin.