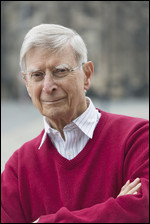 Herbert Blomstedt was born in Springfield, Massachusetts, and two years after his birth, his Swedish parents moved the family back to their country of origin. He studied at the Stockholm Royal College of Music and the University of Uppsala, followed by studies of contemporary music at Darmstadt in 1949, Baroque music with Paul Sacher at the Schola Cantorum Basiliensis, and further conducting studies with Igor Markevitch, Jean Morel at the Juilliard School, and Leonard Bernstein at Tanglewood's Berkshire Music Center. Blomstedt also lived in Finland during his youth.

He won the Koussevitzky Conducting Prize in 1953 and the Salzburg Conducting Competition in 1955.[2]

Blomstedt is most noted for his performances of German and Austrian composers, such as Beethoven, Felix Mendelssohn, Johannes Brahms, Franz Schubert, Anton Bruckner, Richard Strauss and Paul Hindemith, and also as a champion of Scandinavian composers, such as Edvard Grieg, Franz Berwald, Jean Sibelius and Carl Nielsen.

A devout Seventh-day Adventist, Blomstedt does not rehearse on Friday nights or Saturdays, the Sabbath in Seventh-day Adventism. He does, however, conduct concerts, since he considers actual performances to be an expression of his religious devotion rather than work.[3]

He has been Music Director or Principal Conductor of the Norrköping Symphony Orchestra (1954–1962), Oslo Philharmonic Orchestra (1962–1968), Danish Radio Symphony (1967–1977) and Swedish Radio Symphony (1977–1982). From 1975–1985, he served as chief conductor of the Dresdner Staatskapelle, in the process making many well-regarded recordings, including works of Richard Strauss and the complete Beethoven and Schubert symphonies, and leading the orchestra on international tours.

Blomstedt was music director of the San Francisco Symphony from 1985 to 1995. He led the orchestra on regular tours of Europe and Asia, and made numerous prize-winning recordings for London/Decca, winning two Grammy Awards, a Gramophone Award and a Grand Prix du Disque, as well as awards from Belgium, Germany and Japan. After leaving San Francisco full-time, Blomstedt held principal conductorships with the North German Radio Symphony (1996–1998) and Leipzig Gewandhaus Orchestra (1998–2005).

This article uses material from the article Herbert Blomstedt from the free encyclopedia Wikipedia and it is licensed under the GNU Free Documentation License.

I Made Up My Mind Alina Amuri
Update Required To play the media you will need to either update your browser to a recent version or update your Flash plugin.