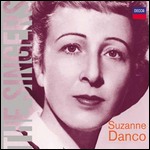 Suzanne Danco was born in Brussels and grew up in a Flemish background, although French was her native language. She studied at the Conservatoire Royal de Bruxelles, and in 1936 won a vocal competition in Vienna after which conductor Erich Kleiber recommended that she continue her studies in Prague with Fernando Carpi. She appears to have made her concert debut in Italy in 1940, and her stage debut in 1941 at the Genoa Opera, singing Fiordiligi in Mozart's Così fan tutte. She appeared in most of the major opera houses in Europe through the 1940s and 1950s, including at La Scala (Jocasta in Oedipus rex by Stravinsky, and Ellen Orford in Peter Grimes), at the Teatro di San Carlo (Marie in Wozzeck), at the Royal Opera House Covent Garden (Mimi in La bohème), and at the festivals of Glyndebourne and Aix-en-Provence (Fiordiligi and Donna Elvira). In 1951, she sang in Boston at a special Peabody Mason Concert series commemorating the Paris Bi-Millennial year.[2]

Although her operatic repertoire was not large, it was notable for its stylistic range, from Mozart roles (Fiordiligi, Anna, Elvira, Cherubino and the Countess) to modern works by Berg, Britten and Stravinsky. Her tone was described as cool, clear, and aristocratic, and well suited to French roles such as Mélisande in Pelléas et Mélisande (preserved in a 4-LP Decca-London set of the early 1950s under Ansermet) and the Princess in Ravel's L'enfant et les sortilèges. Yet she also had success in some Italian works such as The Barber of Seville and La bohème.

She is perhaps best remembered as a recitalist and concert artist, again in a wide range of styles from Bach cantatas to song cycles by Britten and de Falla, but especially in the repertoire of French mélodies where her diction and command of style were heard to particular advantage.

Suzanne Danco retired from singing in 1970 but remained active as a teacher, both at the Accademia Musicale Chigiana in Siena and as a regular visitor to the Britten-Pears School at Snape. She died at the age of 89 on 10 August 2000 at her home in Fiesole near Florence.

Suzanne Danco made many recordings for Decca Records (released on the London label in the U.S.) in the 1940s and 1950s. Some of these are available on CD, including Gluck's Orphée et Eurydice conducted by Hans Rosbaud in 1956, Don Giovanni (as Donna Anna) conducted by Josef Krips, and Le nozze di Figaro (Cherubino) under Erich Kleiber in 1955.

There have been a number of CD reissues of Suzanne Danco's recital performances and recordings, including a 2001 compilation disc entitled The Singers: Suzanne Danco with recordings made between 1947 and 1952.

This article uses material from the article Suzanne Danco from the free encyclopedia Wikipedia and it is licensed under the GNU Free Documentation License.

Don't Fall In Love With A Dreamer Kenny Rogers & Kim Carnes
Update Required To play the media you will need to either update your browser to a recent version or update your Flash plugin.