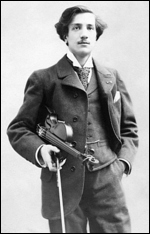 Thibaud was born in Bordeaux and studied the violin with his father before entering the Paris Conservatoire at the age of thirteen. In 1896 he jointly won the conservatory's violin prize with Pierre Monteux (who later became a famous conductor). He had to rebuild his technique after being injured in World War I. In 1943 he and Marguerite Long established the Marguerite Long-Jacques Thibaud International Competition for violinists and pianists, which takes place each year in Paris. From 2011, it has included singers and is now known as the Long-Thibaud-Crespin Competition, in honour of the soprano Régine Crespin.[1]

Thibaud was noted not only for his work as a soloist, but also for his performances of chamber music, particularly in a piano trio with the pianist Alfred Cortot and cellist Pablo Casals. He undertook concert tours with pianist Yves Nat and George Enescu. He was a friend of violinist Eugène Ysaÿe, who dedicated his 2nd Sonata for solo violin to him. Among his students were Manuel Quiroga (the dedicatee of Ysaÿe's 6th solo sonata), Eric Rosenblith and Joan Field.

On 1 September 1953, Thibaud and 41 others died in the crash of Air France Flight 178. The aircraft, registration F-BAZZ, was on final approach to Nice when it struck Mt Cemet in the French Alps. His 1720 Stradivarius violin was destroyed in the crash.[2] The accident investigation established "controlled flight into terrain (CFIT)" as the cause.[3]

This article uses material from the article Jacques Thibaud from the free encyclopedia Wikipedia and it is licensed under the GNU Free Documentation License.

Clock Damian Lynn
Update Required To play the media you will need to either update your browser to a recent version or update your Flash plugin.