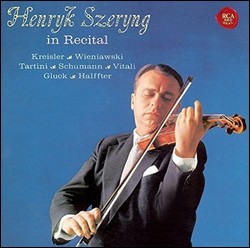 He was born in Warsaw,[1] Poland on 22 September 1918[2] into a wealthy Jewish family. The surname "Szeryng" is a Polish transliteration of his Yiddish surname, which nowadays would be spelled "Shering" in the modern Yiddish-to-English transliteration.

Henryk started piano and harmony lessons with his mother when he was 5, and at age 7 turned to the violin, receiving instruction from Maurice Frenkel. After studies with Carl Flesch in Berlin (1929–32), he went to Paris to continue his studies with Jacques Thibaud at the Conservatory, graduating with a premier prix in 1937.

He made his solo debut on 6 January 1933 playing the Brahms Violin Concerto with the Warsaw Philharmonic Orchestra under Romanian conductor George Georgescu.[3] From 1933 to 1939 he studied composition in Paris with Nadia Boulanger.

When World War II broke out, General Wladyslaw Sikorski - the Premier of the Polish government in exile - asked Szeryng, who was fluent in seven languages, to serve as his liaison officer and interpreter. Szeryng took these positions and discontinued his studies, although he continued to perform on the violin, giving over 300 concerts for Allied troops all over the world. When he accompanied Sikorski on a mission to Mexico in 1941 seeking a home for 4,000 Polish refugees, the positive reception moved Szeryng so deeply that he decided to become a Mexican naturalized citizen, and did so in 1946. In 1945 he accepted the request (made in 1943) that he head the string department of National University of Mexico.

In 1954, the pianist Arthur Rubinstein - also a Jewish refugee from Poland - gave a concert in Mexico City; Szeryng visited him backstage afterwards, and accepted Rubinstein's invitation to come to his hotel to play music. Szeryng's playing of solo violin music of Johann Sebastian Bach that night, said Rubinstein, "reduced me to tears....Real music lovers want emotion--great moments--which Szeryng's playing gives them." [4] Rubinstein encouraged Szeryng to begin concertizing again, and introduced him to impresario Sol Hurok to help achieve this end. Rubinstein and Szeryng made music together regularly for the rest of their careers, and recorded much of the classic chamber music literature either as a duo or in a trio with cellist Pierre Fournier. Szeryng went on to win such major awards as six Grand prix du Disque awards, the Médaille d'Argent of the city of Paris, two Edison Awards, and was also made an Officer of the Ordre des Arts et Lettres in Paris in 1963, among many other honors received.

In 1960, Szeryng was named Mexican Cultural Ambassador. In 1966, by which time he had moved to Paris, he was designated Honorary Director of the Conservatory of Music in Mexico City, and a Henryk Szeryng Music Festival was held in his honor in Mexico City. He returned to Mexico twice a year and traveled on a diplomatic passport as Mexico's official cultural ambassador, but lived in Paris for two decades, then spent his last five years in Monaco.

Szeryng died of a cerebral hemorrhage in Kassel, Germany, on 3 March 1988.[2] He was buried at Cimetière de Monaco, the headstone bearing the concluding bars of the Ciaconna from Bach's Partita No.2 for Solo Violin (with his own published annotation).[5]

Szeryng made a number of recordings, including two complete cycles of sonatas and partitas for violin by Johann Sebastian Bach, and several sonatas by Beethoven and Brahms with Arthur Rubinstein. He was also first in history to record then newly discovered Niccolo Paganini's 3rd violin concerto. His recordings of Mozart and Beethoven piano and violin sonatas with Ingrid Haebler are widely esteemed.

He owned the Guarneri del Gesù "Le Duc" and "Sanctae Theresiae" violins, the Stradivarius "Hercules" violin, as well as the Messiah Strad copy by Jean-Baptiste Vuillaume which he gave to Prince Rainier III of Monaco. The "Le Duc" was the instrument on which he performed and recorded mostly. In December 1972 he donated the "Hercules" to the City of Jerusalem to honor the 25th anniversary of the founding of the State of Israel, with the stipulation that it be loaned out for the use of outstanding young Israeli violinists. He also donated the "Sanctae Theresiae" to Mexico in 1974 with a similar stipulation that it be loaned for the use of outstanding young Mexican violinists.

This article uses material from the article Henryk Szeryng from the free encyclopedia Wikipedia and it is licensed under the GNU Free Documentation License.

One Way Street Andrew Timli
Update Required To play the media you will need to either update your browser to a recent version or update your Flash plugin.