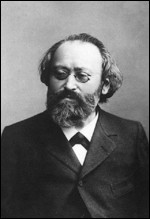 Max Christian Friedrich Bruch[1] (6 January 1838–2 October 1920), also known as Max Karl August Bruch,[2][3] was a German Romantic composer and conductor who wrote over 200 works, including three violin concertos, the first of which has become a staple of the violin repertory.

Bruch was born in Cologne, the son of Wilhelmine (née Almenräder), a singer, and August Carl Friedrich Bruch, a lawyer who became vice president of the Cologne police.[1]:15 Max had a sister, Mathilde ("Till").[1]:15

He received his early musical training under the composer and pianist Ferdinand Hiller, to whom Robert Schumann dedicated his piano concerto in A minor. The Bohemian composer and piano virtuoso Ignaz Moscheles recognized his aptitude.[1]:25 At the age of nine he wrote his first composition, a song for his mother's birthday. From then on music was his passion, and his studies were enthusiastically supported by his parents. He wrote many minor early works including motets, psalm settings, piano pieces, violin sonatas, a string quartet and even orchestral works such as the prelude to a planned opera Joan of Arc. Few of these early works have survived, however the locations of the pieces are unknown at this time.

The first music theory lesson he had was in 1849 in Bonn, and it was given to him by Professor Heinrich Carl Breidenstein, a friend of his father. At this time he was staying at an estate in Bergisch Gladbach, where he wrote much of his music. The farm belonged to a lawyer and notary called Neissen, who lived in it with his unmarried sister. Later the estate was bought by the Zanders family who owned a large paper mill. The young Bruch was taught French and English conversation by his father. In later years, Maria Zanders became a friend and patron.[1]:98

He taught composition at the Berlin Hochschule für Musik from 1890 until his retirement in 1910.

Bruch married Clara Tuczek, a singer he had met whilst touring in Germany, in Berlin on 3 January 1881. The couple returned to Liverpool and took lodgings in Sefton Park. Their daughter, Margaretha, was born in Liverpool in 1882.

Bruch died, quietly and painlessly, in his house in Berlin-Friedenau in 1920.[4] He was buried next to his wife, who had died on 26 August the previous year, at the Old St. Matthäus churchyard at Berlin-Schöneberg. His daughter Margaretha later had carved on the gravestone "Music is the language of God".[4]

His complex and unfailingly well-structured works, in the German Romantic musical tradition, placed him in the camp of Romantic classicism exemplified by Johannes Brahms, rather than the opposing "New Music" of Franz Liszt and Richard Wagner. In his time he was known primarily as a choral composer.

His Violin Concerto No. 1, in G minor, Op. 26 (1866) is one of the most popular Romantic violin concertos. It uses several techniques from Felix Mendelssohn's Violin Concerto in E minor. These include the linking of movements, as well as omitting the Classical opening orchestral exposition and other conservative formal structural devices of earlier concertos.

The two other works of Bruch which are still widely played were also written for solo string instrument with orchestra: the Scottish Fantasy for violin and orchestra, which includes an arrangement of the tune "Hey Tuttie Tatie", best known for its use in the song "Scots Wha Hae" by Robert Burns; and the Kol Nidrei, Op. 47, for cello and orchestra (subtitled "Adagio on Hebrew Melodies for Violoncello and Orchestra"), which starts and ends with the solo cello's setting of the Kol Nidre ("All Vows ... ") incantation which begins the Jewish (Ashkenazic) Yom Kippur service. This work may well have inspired Ernest Bloch's Schelomo (subtitled "Hebrew Rhapsody") of 1916, an even more passionate and extended one-movement composition, also with a Jewish subject and also for solo cello and orchestra.

The success of Kol Nidrei led to the assumption by many that Bruch was of Jewish ancestry, although the composer himself refuted this. Indeed, as long as the National Socialist Party was in power (1933-1945), performance of his music was restricted because he was considered a possible Jew for having written music with an openly Jewish theme, despite repeated denials by his surviving family. As a result, his music was largely forgotten in German-speaking countries. There is no evidence, however, that Bruch was of Jewish origin. As far as can be ascertained, none of his ancestors were Jews. Bruch himself was given the middle name Christian[1]:15 and was raised Protestant.[1]:109

In the realm of chamber music, Bruch is not well known, although his "Eight Pieces for Clarinet, Viola and Piano" are occasionally revived, there being very little other music written for this rare combination of instruments. As with Brahms, who had produced his clarinet compositions with a particular clarinetist in mind, so did Bruch write these trios for his own son Max. These pieces do not stand alone, however, in Bruch's output. Nevertheless, he wrote many pieces in the chamber music tradition, of which his septet is noteworthy. His first major pieces, composed at the start of his career, are two string quartets that are similar in tone and intensity to Schumann's string quartets (Op. 41). The composition of his second piano quintet is intriguing, as he began while conductor of the Liverpool Philharmonic Society. Although written for amateurs, it is a fair composition and was completed only after Bruch was gently persuaded, after leaving Liverpool, to finish the last movement.

Towards the end of his life, in 1918, he once more considered smaller ensembles with the composition of two string quintets, of which one served as the basis for a string octet, written in 1920 for four violins, two violas, cello and a double bass . This octet is somewhat at odds with the innovative style of the decade. While such composers as Schönberg and Stravinsky were part of the forward-looking modern trend, Bruch and others tried to compose still within the Romantic tradition, effectively glorifying a form of Late Romanticism and avoiding the revolutionary spirit that was engulfing the defeated Germany. All three of these late chamber works exhibit a 'concertante' style in which the first violin part is predominant and contains much of the musical interest. By the time they came to be performed professionally for the first time, in the 1930s, Bruch's reputation had deteriorated and he was known only for the famous Concerto.[5]

Other works include two concerti for violin and orchestra, No. 2 in D minor (1878) and No. 3 in D minor (1891) (which Bruch himself regarded as at least as fine as the famous first); as well as a lovely and melodic Concerto for Clarinet, Viola and Orchestra, and many more pieces for violin, viola or cello and orchestra. His three symphonies contain distinctive German Romantic melodic writing effectively orchestrated.

To this triple output he added three orchestral suites in later life, of which the third has a remarkable history. The origin can be found in Capri, where Bruch had witnessed a procession in which a tuba played a tune that "could very well be the basis of a funeral march", and would be the basis of this suite, finished in 1909. The Sutro sisters, however, had asked Bruch for a concerto specifically for them, which he produced by arranging this suite into a double piano concerto, but only to be played within the Americas and not beyond. The Concerto in A-flat minor for Two Pianos and Orchestra, Op. 88a, was finished in 1912 for the American duo Sutro pianists Rose and Ottilie Sutro, but was never played in the original version. They performed the work only twice, in two different versions of their own. The score was withdrawn in 1917 and rediscovered only after Ottilie Sutro's death in 1970. The sisters also played a major part in the fate of the manuscript of the Violin Concerto No. 1. Bruch sent it to them to be sold in the United States, but they kept it and sold it for profit themselves.

Violinists Joseph Joachim and Willy Hess advised Bruch on his writing for that instrument, and Hess premiered some of his works including the Concert Piece for Violin and Orchestra, Op. 84, which was composed for him.

This article uses material from the article Max Bruch from the free encyclopedia Wikipedia and it is licensed under the GNU Free Documentation License.

Talking In Your Sleep Romantics
Update Required To play the media you will need to either update your browser to a recent version or update your Flash plugin.