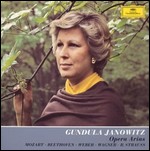 Gundula Janowitz (born August 2, 1937)[1] is a German-born Austrian lyric soprano singer of operas, oratorios, lieder, and concerts. She is one of the most renowned opera singers of the 20th century and was pre-eminent in the 1960s and 1970s.

Janowitz was born in Berlin, Germany, but grew up in Graz, Austria, where she became a naturalised Austrian.[2] She studied at the Graz Conservatory in Austria,[3] and had already begun to sing at the highest level by the end of the 1950s (Haydn's The Creation, with Herbert von Karajan in 1960). In 1959, Karajan engaged her as Barbarina in Mozart's The Marriage of Figaro at the Vienna State Opera, of which she became a permanent member in 1962. In the 1960s and 1970s, she became one of the most popular singers in her field internationally and she developed a comprehensive discography of works ranging from Johann Sebastian Bach to Richard Strauss, in cooperation with the most prominent conductors (her mentor at times, Karajan, as well as Otto Klemperer, Eugen Jochum, Leonard Bernstein, Rafael Kubelík, Karl Böhm, Georg Solti, Carlos Kleiber, etc.)

One of the emphases of Janowitz's work was the development of song recitals, which she gave several times at the Salzburg Festivals. Following her vocal career, she was active as a vocal teacher. In 1990, she temporarily took over the position of Opera Director in Graz.[3]

In 1978, Gundula Janowitz was awarded the Joseph Marx Music Prize of the state of Styria, Austria, named for the composer Joseph Marx.[4] She was bestowed the title "Kammersängerin" in 1969 in Vienna and again in 1974 in Berlin.[5]

Janowitz appeared on many of the great stages of the world, including Glyndebourne Festival Opera, the Bayreuther Festspiele, the Salzburg Easter Festivals, the Metropolitan Opera, the Paris Opéra, the Teatro alla Scala and the Royal Opera House. In 1980, she sang the part of the Countess in a now legendary new production of Le nozze di Figaro (with Georg Solti as conductor, Giorgio Strehler as director and Ezio Frigerio as set designer).

Her recording of Schubert's lieder for female voice has been twice awarded Germany's Deutscher Schallplattenpreis.[6]

Her opera farewell was on May 18, 1990, at the Vienna State Opera in the title role of Ariadne auf Naxos (with Heinrich Hollreiser as conductor, and Filippo Sanjust as director and designer). Janowitz kept singing Lied recitals until 1997, when she completely retired from the stage. She is an honorary member of the Vienna State Opera and of the Academy of Music in Graz. She was made an honorary member of the Royal Academy of Music in London in 2000.

Janowitz's voice is recognizable by its pure,[7][8] "crystal clear”,[9] "creamy"[10] tone, and rapid vibrato.[11] Like her predecessor Maria Stader, who had similar timbre to hers, and like her contemporary, Elizabeth Harwood, Janowitz mastered first and foremost the high and middle register and lyrical-emotional expression. Despite her comparatively weak sound projection, she occasionally performed in dramatic roles (Sieglinde, Leonore, Elsa) or comic roles (Marzelline, Rosalinde), but she was most highly regarded as Fiordiligi, Countess Rosina Almaviva, Pamina, Agathe, Arabella, Ariadne, the Angel Gabriel (The Creation), Countess Madeleine, and in sacred music.[1] Of her interpretation of Four Last Songs by Richard Strauss, David Bowie wrote: "Although Eleanor Steber and Lisa della Casa do fine interpretations of this monumental work, Janowitz’s performance [...] has been described, rightly, as transcendental. It aches with love for a life that is quietly fading. I know of no other piece of music, nor any performance, which moves me quite like this."[12] With a few exceptions, she avoided foreign-language roles (although recordings exist of her singing Don Carlos and Verdi's Requiem and all three Mozart/DaPonte operas in Italian). An excerpt of her portrayal of the Figaro Countess in a duet with Swiss soprano Edith Mathis features prominently in The Shawshank Redemption (1994).

This article uses material from the article Gundula Janowitz from the free encyclopedia Wikipedia and it is licensed under the GNU Free Documentation License.

Sitting On The Docks Hang Loose
Update Required To play the media you will need to either update your browser to a recent version or update your Flash plugin.