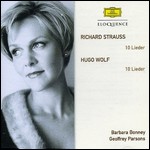 Bonney was born in Montclair, New Jersey. As a child she studied piano and cello. When Bonney was 13 her family moved to Maine, where she became part of the Portland Youth Orchestra as a cellist. She spent two years at the University of New Hampshire (UNH) studying German and music including voice with Patricia Stedry, and spent her junior year at the University of Salzburg, where she switched from cello to voice. While there, she studied at the Salzburg Mozarteum.[1] Years later she received an honorary doctorate from UNH.

In 1979, Bonney joined the Staatstheater Darmstadt, where she made her debut as Anna in Die lustigen Weiber von Windsor (The Merry Wives of Windsor). In the subsequent five years she made appearances throughout Germany and Europe, notably at the Royal Opera House Covent Garden in London and La Scala in Milan. She made her Metropolitan Opera debut in 1987 in Richard Strauss' Ariadne auf Naxos in the role of Nyade and her Vienna Staatsoper debut the same year as Sophie in Der Rosenkavalier. Since then, she has appeared at the major opera houses of the world and at the Salzburg Festival, where she was Servilia in Mozart's La clemenza di Tito.

Along with her repertoire in opera as a lyric soprano, she is a distinguished recitalist, and has appeared on more than 90 recordings, including 15 solo recitals. For two years, starting in 1999, Bonney did not perform in opera, to focus on lieder recitals.[2] However, she noted that solo recitals lacked the camaraderie of performing in an opera production with many other people.[3] In 2002, she contributed "The Willow Song" to the compilation album, When Love Speaks (EMI Classics), which features famous actors and musicians interpreting Shakespeare's sonnets and play excerpts. Other albums include her 2006 work on Welcome to the Voice, composed by Steve Nieve.

On August 1, 2006, IMG Artists announced that all forthcoming appearances by Bonney were cancelled and that they would no longer be representing her.[4] At the time, the IMG Artists website only stated the reason as "due to personal circumstances", but Bonney has stated in a July 2007 article that those circumstances included her "difficult" divorce from Maurice Whitaker. Previously, she was married to Hakan Hagegard for seven years, and this marriage ended in divorce.[5]

Bonney is a member of the Royal Swedish Academy of Music and is visiting professor at the Royal Academy of Music, London. She is also on the faculty of the Mozarteum, Salzburg, as University Professor of Singing. In addition to her academic activities and singing career, she opened a business based in Salzburg in 2011, on her 55th birthday, LUNA Dress Design.

This article uses material from the article Barbara Bonney from the free encyclopedia Wikipedia and it is licensed under the GNU Free Documentation License.