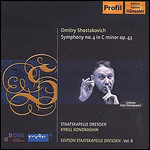 died on 8/3/1981 in Amsterdam, Noord-Holland, Netherlands

He was born in Moscow to a family of orchestral musicians. Having spent many hours at rehearsals, he made a firm decision at the age of 14 to become a conductor. He studied at the Moscow Conservatory from 1931 to 1936 under the conductor Boris Khaykin (who was only 3 years older than Kondrashin himself). Kondrashin began conducting in the Young People's Theatre in Moscow in 1931, continuing in the Stanislavsky and Nemirovich-Danchenko Moscow Academic Music Theatre three years later. He conducted at the Maliy Opera Theatre in Leningrad from 1938 to 1942 and the Bolshoi Theatre in Moscow from 1943. His performance of Shostakovich's Symphony No.1 attracted the composer's attention and led to the formation of a firm friendship. In 1947 he was awarded the Stalin Medal.

In the first International Tchaikovsky Competition in 1958, he was the conductor for Van Cliburn, who won the first prize. After the competition he toured the United States with Cliburn, being the first Russian conductor to visit America since the Cold War began. They performed and recorded the Rachmaninoff Piano Concerto No.3 and Tchaikovsky Piano Concerto No.1, which they had played in the competition. The recordings easily sold millions of copies in America. And their Tchaikovsky recording for RCA Victor was the first classical LP to go platinum. Later, in 1972, a live performance of Brahms's Piano Concerto No. 2 reunited Cliburn and Kondrashin with the Moscow Philharmonic in Moscow; RCA Victor eventually released the performance, along with a studio recording of Rachmaninoff's Rhapsody on a Theme of Paganini, on CD. He was also the artistic director of the Moscow Philharmonic Orchestra from 1960 to 1975. During this period he premiered Shostakovich's Symphony No.4 in December 1961 and No.13 the following year.[1] He gave several performances in Europe and America with other famous Russian musicians like Rostropovich, Oistrakh, and Sviatoslav Richter.

He left the Soviet Union in December 1978 while touring in the Netherlands and sought political asylum there, whereupon the Soviet regime immediately banned all his previous recordings. He took the post of Permanent Guest Conductor of Amsterdam's Concertgebouw Orchestra in 1978 and remained in that position until his death. He also established a brief but fruitful collaboration with the Vienna Philharmonic.

In the Netherlands he married his assistant and interpreter, musicologist Nolda Broekstra (b. 1944). When they first met around 1975, Broekstra was 30 years younger and spoke no Russian; both were married and were not fluent in English, the language they spoke. Yet they fell in love, tried to be together when they could, and exchanged letters. Broekstra diligently started studying Russian and English and quickly mastered both languages.[2] Their family life in the Netherlands was short, as Kondrashin died in Amsterdam from a heart attack in early 1981, on the same day he conducted Mahler's First Symphony with the North German Radio Symphony Orchestra. Philips Records issued recordings of some of Kondrashin's live concerts with the Concertgebouw Orchestra on LP and CD, including energetic performances of symphonies by Shostakovich. On the recording of Shostakovich's sixth symphony Kondrashin can be heard tapping or even pounding his foot as he conducts the lively final movement.[3]

This article uses material from the article Kirill Kondrashin from the free encyclopedia Wikipedia and it is licensed under the GNU Free Documentation License.

Hole In My Heart Estella Benedetti
Update Required To play the media you will need to either update your browser to a recent version or update your Flash plugin.