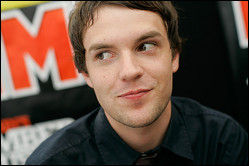 Brandon Richard Flowers (born June 21, 1981) is an American singer, songwriter and multi-instrumentalist. He is best known as the lead singer, keyboardist and occasional bass guitarist of the Las Vegas-based rock band The Killers, with whom he has recorded four studio albums.

In addition to his work with the Killers, Flowers has released two solo albums, Flamingo (2010) and The Desired Effect (2015). He has topped the UK Albums Chart six times, including work by the Killers, and is a recipient of the Q Idol Award.[5].

Brandon Richard Flowers, the youngest of six children, was born on June 21, 1981, in Henderson, Nevada, to Jean Yvonne (née Barlow) and Terry Austin Flowers.[6] His older siblings are his brother Shane and four sisters April, Shelly, Amy, and Stephanie.[6] His family lived in Henderson until Flowers was eight, when they moved to Payson, Utah, for two years before moving to Nephi, Utah, at which time he was in the sixth grade.[7] Flowers lived in Nephi until his junior year at Juab High School. He moved to Las Vegas to live with his aunt and graduated from Chaparral High School in 1999.[8] The alt-rock singer often says that growing up in Las Vegas as a member of the Church of Jesus Christ of Latter-day Saints helped prepare him for the world of rock and roll: "Really, being a Mormon in Las Vegas prepared me for the lion's den. It is sin city. The things that go on, the lights, it's the ultimate rock and roll stage. Without Las Vegas, I would be a wreck."[9]

Flowers responded to an ad that Dave Keuning had placed in the Las Vegas Weekly in late 2001, whereupon they became The Killers. After several short-lived bassists and drummers, Flowers and Keuning were joined by bassist Mark Stoermer and drummer Ronnie Vannucci, and the line-up became official in August 2002.[10] Between 2003 and 2013, they released four consecutive chart-topping albums and have sold over 22 million records worldwide.[11][12][13] Flowers wrote the lyrics to the single "All These Things That I've Done" and its popular refrain "I Got Soul, But I'm Not A Soldier" that numbered among the "100 Greatest Songs of All Time" by The Daily Telegraph and earned one of the band's seven Grammy nominations.[14]

Canadian-American singer-songwriter Rufus Wainwright wrote a song about Flowers called "Tulsa" for his fifth album Release the Stars. Wainwright has stated in numerous interviews that it was inspired by their first meeting at a bar in Tulsa, Oklahoma. According to Wainwright, Flowers was "very flattered and somewhat bashful" about this tribute.[18] Elton John listed Flowers as one of his top five heroes while editing The Independent's World Aids Day special edition.[19][20]

Debut solo album Flamingo was released worldwide and charted in the top ten albums in ten countries including the UK where it charted at number one.[21][22] The album drew heavy influence from Flowers' hometown of Las Vegas, Nevada, and earned Flowers a Q Award nomination for Best Male Artist (2010). The first single from Flamingo, "Crossfire", was released on June 21. It became Flowers' first top ten single in the UK as a solo artist and was certified silver by the BPI. The video for "Crossfire" featured actress Charlize Theron and was nominated for Best Video at the NME Awards. Flamingo was Flowers' fourth consecutive studio album to reach no. 1 on the UK charts, including work by the Killers, who subsequently earned another consecutive UK No. 1.[23]

SPIN named Flowers one of "The 15 Best Shows of the Summer" in 2010 for his performance at the Shimmer Showroom in Las Vegas.[24] SPIN also listed the Flamingo Road Tour as one of "The 25 Best Fall Tours"/"Must-See Fall Tours".[25]

After some of the band members wanted "to take a break from touring and the rat race," Flowers decided to keep it going and record a second solo album.[26] Flowers released his second solo album The Desired Effect on May 15, 2015. The album debuted at number one on the UK Albums Chart, making it Flowers' second consecutive solo number one album.[27] Flowers stated that the album was "definitely going to be different" from his last album, and he referred to producer Ariel Rechtshaid (Vampire Weekend, HAIM, Taylor Swift) as his "co-captain".[28][29] The album featured performances by notable artists including Bruce Hornsby, Tony Levin (Peter Gabriel), Joey Waronker (Beck), Carlos Alomar (David Bowie), and Kenny Aronoff (John Mellencamp).[30] The Desired Effect is Flowers' highest yet ranked album on Metacritic.[31][32] The Desired Effect was named the Album of the Year (2015) by The Sun and The San Francisco Examiner.[33][34][35] Reviews have stated that the album is Flowers' finest since Hot Fuss.[36][37][38][39] The album was preceded by positively reviewed singles "Can't Deny My Love", "Still Want You", "Lonely Town", and "I Can Change".[40][41][42][43] Multiple tracks from the album have been listed on Best Songs of 2015 So Far lists by publications including SPIN, NPR, and Mashable. Halfway through 2015, USA Today listed the album as one of the top five best albums of 2015 so far.[44]

In 2015, Flowers also featured on the closing track of New Order's Music Complete.[52]

Flowers is married to Tana Mundkowsky and resides in Las Vegas.[53][54] He has three sons, Ammon, Gunnar, and Henry.[55][56] Flowers' parents met as teenagers, and he wrote the song "A Dustland Fairytale" as a tribute to their marriage and lifelong romance.[57] Flowers' grandmother is from Lithuania.[58] Flowers' cousin is Craig Barlow, inductee to the Las Vegas Golf Hall of Fame.[59]

Flowers is a member of The Church of Jesus Christ of Latter-day Saints.[60] He and his family are featured in a promotional video on the church's website.[61][62]

Flowers is regarded as a prominent frontman of the new wave revival in the 2000s.[69][70] As a solo artist Flowers first exhibited elements of heartland rock as well as new wave-style alternative rock. On his sophomore album, Flowers exhibited greater pop tendencies, prompting Rolling Stone Magazine to dub The Desired Effect, "the best straight-up pop album made by a rock star in recent memory."[71]

U2's lead singer Bono praised Flowers' voice to The Globe and Mail saying, "We need him on the radio .... His voice!"[72]

Brandon Flowers has been awarded the Q Idol Award.

This article uses material from the article Brandon Flowers from the free encyclopedia Wikipedia and it is licensed under the GNU Free Documentation License.

Motion Streets Of Roya
Update Required To play the media you will need to either update your browser to a recent version or update your Flash plugin.