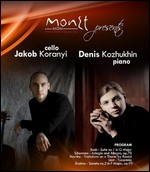 Denis Kozhukhin (born in Nizhny Novgorod, 1986) is a Russian pianist who was awarded the 2006 Leeds International Pianoforte Competition's 3rd prize. He was awarded too the 2010 Belgian Queen Elisabeth Music Competition's 1st prize (for piano).

Kozhukhin was a pupil at the Escuela Superior de Música Reina Sofía in Madrid studying with Dimitri Bashkirov and Claudio Martínez Mehner. Upon graduating, he received his diploma personally from Queen Sofía of Spain and was named best student in his year and twice best chamber group with his own Cervantes Trio. After his studies in Madrid, Kozhukhin was invited to study at the International Piano Academy Lake Como where he received tuition from Dimitri Bashkirov, Fou Ts'ong, Stanislav Ioudenitch, Peter Frankl, William Grant Naboré, John Perry, Menahem Pressler, Boris Berman, Charles Rosen and Andreas Staier.

This article uses material from the article Denis Kozhukhin from the free encyclopedia Wikipedia and it is licensed under the GNU Free Documentation License.

Too Busy Thinking About My Baby Manhattan Transfer with Phil Collins
Update Required To play the media you will need to either update your browser to a recent version or update your Flash plugin.