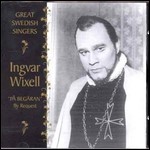 Karl Gustaf Ingvar Wixell,[1] (May 7, 1931[2] – October 8, 2011) was a Swedish baritone who had an active international career in operas and concerts from 1955 to 2003. He mostly sang roles from the Italian repertory, and, according to The New York Times, "was best known for his steady-toned, riveting portrayals of the major baritone roles of Giuseppe Verdi — among them Rigoletto, Simon Boccanegra, Amonasro in Aida, and Germont in La traviata".[3]

Ingvar Wixell was born in Luleå in 1931. After studies at the Stockholm Academy of Music, he made his debut in Gävle in 1952,[4] then in 1955 as Papageno in Mozart's The Magic Flute at the Royal Swedish Opera in Stockholm where he was member of the company until 1967.[5]

He made his British debut during the Royal Swedish Opera's visit to the Edinburgh International Festival in 1959.[6] Wixell returned with this company to Covent Garden in 1960, and sang Guglielmo at Glyndebourne and at the Proms in 1962. For the Royal Opera, London he sang Boccanegra in 1972. In America he appeared at Chicago Lyric Opera (Belcore, 1967) and the Metropolitan Opera (Rigoletto, 1973).[5]

Wixell performed all the songs in the competition to select Sweden's Eurovision Song Contest 1965 entry. The winning song was "Annorstädes Vals" (Elsewhere Waltz), which Wixell went on to perform at the international final in Naples. In a break from the then prevailing tradition, the song was sung in English (as "Absent Friend"). This led to the introduction from 1966 onwards of a rule stipulating that each country's entry must be sung in one of the languages of that country.

Wixell ended his career in 2003 by singing the Music teacher in Richard Strauss's Ariadne auf Naxos at Malmö Opera.

With his wife, Margareta, Wixell had two daughters, Marit and Jette; all three outlived him.[3]

This article uses material from the article Ingvar Wixell from the free encyclopedia Wikipedia and it is licensed under the GNU Free Documentation License.