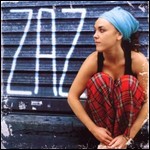 Isabelle Geffroy[1] (born 1 May 1980 in Tours, France), better known by the nickname Zaz, is a French singer-songwriter who mixes jazzy styles, French variety, soul and acoustic. She is famous for her hit "Je veux", from her first album, Zaz, released on 10 May 2010.[2]

Her mother was a Spanish teacher, whereas her father worked for an electric company. In 1985, she entered the Conservatoire de Tours with her sister and her brother, attending courses from the ages of five to eleven. She studied music theory, specifically the violin, piano, guitar, and choral singing. In 1994, she moved to Bordeaux. In 1995, she took singing lessons and played sports for a year in Bordeaux, all while studying kung fu with a professional coach.[3] In 2000, she won a scholarship from the regional council, which allowed her to join a school of modern music, the CIAM (Centre for Musical Activities and Information) of Bordeaux. Her musical influences included 'Four Seasons' by Vivaldi, jazz singers such as Ella Fitzgerald, and other singers such as Enrico Macias, Bobby McFerrin, and Richard Bona, as well as African, Latin, and Cuban rhythms. In 2006, she moved to Paris.

In 2001, she started her singing career in the blues band "Fifty Fingers". She sang in musical groups in Angoulême, especially in a jazz quintet.[4] She became one of the four singers of Izar-Adatz (Basque for "Shooting Star"), a variety band which consisted of sixteen people with whom she toured for two years, especially in the Midi-Pyrenees and the Basque Country. She worked in the studio as a backing singer in Toulouse and performed with many singers, including Maeso, Art Mengo, Vladimir Max, Jean-Pierre Mader , Eduardo Sanguinetti, the latinoamerican philosopher and land-artist,[5] and Serge Guerao.

In 2011, Zaz won an EBBA Award. Every year the European Border Breakers Awards (EBBA) recognize the success of ten emerging artists or groups who reached audiences outside their own countries with their first internationally released album in the past year.

In May 2010, French magazine Telerama announced: "Rumor has swelled in recent weeks: Zaz is a sacred voice, and she will be the revelation of the summer!".[6] On 10 May 2010, Zaz released her first album. It contains songs she wrote ("Trop sensible") and co-composed ("Les passants", "Le long de la route", "Prends garde à ta langue", "J'aime à nouveau", "Ni oui ni non"). Kerredine Soltani produced the album on the label "Play On" and wrote and composed the hit single "Je veux". The pop singer Raphaël Haroche wrote her songs "Éblouie par la nuit", "Port Coton" and "La fée". In 2010, she signed a contract for her tours with Caramba and publisher Sony ATV. She was invited to make several television appearances (such as Taratata or Chabada) and was featured in several programs on the radio. On Sunday 6 October 2013, Zaz appeared on BBC1 Tv program The Andrew Marr Show in London and sang "Je veux" live.

Zaz then toured France (Paris, La Rochelle, Montauban, Saint-Ouen, Chateauroux, Landerneau, Fécamp...), performed at the Francofolies of Montreal (Canada), and sang in Monthey (Switzerland), Brussels, Berlin, and Milan. In autumn Zaz topped the charts in Belgium, Switzerland, and Austria. Matthieu Baligand, her manager and producer at Caramba Entertainment, explained to Liberation: "We talk a lot of her right now and people are waiting her at the turn... Despite the demand, it seems preferable to do her first tour in fifty small places which will render her credible. Zaz is a popular, intuitive artist, who is familiar with music, who can sing, but doing a quality show is something else (...)." In November 2010, the debut album Zaz became double platinum and she was awarded "Revelation Song" by the Academy Charles Cros. Zaz also won the European Border Breakers Award: she was named the French artist most played abroad in 2010. According to a survey published by L'Internaute, Zaz was the most popular French singer in the 2010 ranking.[7]

In 2011, she joined the Les Enfoirés charity ensemble. She is also featured on the song "Coeur Volant" for the soundtrack of the 2011 film, Hugo. Her live CD and DVD Zaz live tour Sans Tsu Tsou was revealed.

In 2012, Zaz went on tour and held concerts in various countries around the world including Japan, Canada, Germany, Poland, Switzerland, Slovenia, Czech Republic, Croatia, Bulgaria, Serbia, and Turkey, among other countries.[8]

1 Did not chart on main chart Ultratop, but bubbling under Ultratip Chart, reaching #32. Added 50 positions to actual Ultratip position for reporting purposes in table.

This article uses material from the article Zaz (singer) from the free encyclopedia Wikipedia and it is licensed under the GNU Free Documentation License.

Thelma & Louise Nanna Larsen
Update Required To play the media you will need to either update your browser to a recent version or update your Flash plugin.