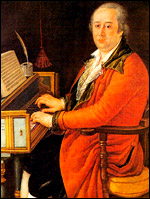 Cimarosa was born in Aversa in Campania.

His parents were poor, but, anxious to give their son a good education, they sent him to a free school connected with one of the monasteries in Naples after moving to that city. The organist of the monastery, Padre Polcano, was struck by the boy's intellect, and instructed him in the elements of music and also in the ancient and modern literature of his country. Because of his influence, Cimarosa obtained a scholarship at the musical institute of Santa Maria di Loreto in Naples, where he remained for eleven years, chiefly studying with great masters of the old Italian school; Niccolò Piccinni, Antonio Sacchini, and other musicians of repute are mentioned among his teachers.[2]

At the age of twenty-three, Cimarosa began his career as a composer with an opera buffa called Le stravaganze del conte, first performed at the Teatro del Fiorentini at Naples in 1772. The work met with approval, and was followed in the same year by Le pazzie di Stelladaura e di Zoroastro, a farce full of humour and eccentricity. This work was also successful, and the fame of the young composer began to spread all over Italy. In 1774, he was invited to Rome to write an opera for the stagione of that year; and there he produced another comic opera called L'italiana in Londra.[2]

Over the next thirteen years, Cimarosa wrote a number of operas for the various theatres of Italy, living temporarily in Rome, in Naples, or wherever else his vocation as conductor of his works happened to take him. From 1784 to 1787, he lived in Florence, writing exclusively for the theatre of that city. The productions of this period of his life are very numerous, consisting of operas (both comic and serious), cantatas, and various sacred compositions. The following works may be mentioned, among many others: Cajo Mario; the three Biblical operas, Assalone, La giuditta, and Il sacrificio d'Abramo; Il convito di pietra; and La ballerina amante, a comic opera first performed at Venice with enormous success.[2][3]

In 1787, Cimarosa went to St. Petersburg by invitation of Empress Catherine II. He remained at her court for four years and wrote an enormous number of compositions, mostly of the nature of pièces d'occasion; of most of these, not even the names are on record. One important exception was a Requiem, entitled Messa da Requiem in G minor. The piece, composed in 1787, was commissioned to mark the death of the wife of the French ambassador in St. Petersburg. In 1792, Cimarosa left St. Petersburg and went to Vienna at the invitation of Emperor Leopold II. Here, he produced his masterpiece, Il matrimonio segreto, which ranks among the greatest examples of opera buffa (Verdi considered it the model opera buffa). In 1793, Cimarosa returned to Naples, where Il matrimonio segreto and other works were received with great acclaim. Among the works belonging to his last stay in Naples that may be mentioned is the charming opera, Le astuzie femminili.[2]

This period of his life is said to have been embittered by the intrigues of envious and hostile persons, including his old rival, Giovanni Paisiello. During the occupation of Naples by the troops of the French Republic, Cimarosa joined the liberal party, but on the return of the Bourbons was imprisoned along with many of his political friends (some say even condemned to death). His sentence was commuted to banishment when influential admirers interceded, and he left Naples with the intention of returning to St. Petersburg, but his health was broken and after much suffering he died in Venice on 11 January 1801 of an intestinal inflammation. The nature of his disease led to the rumor of his having been poisoned by his enemies; however, a formal inquest proved this to be unfounded. He worked until the last moment of his life, and one of his operas, Artemisia, remained unfinished at his death.[2] The place of his death is marked by a memorial in Campo San Angelo near the calle de Caffetier.

Studio Lirico, a summer program for opera singers patronized by University of South Carolina, produced, from 1992 to 1995, a lot of Cimarosa's operas (sometime in first production in modern time) by the artistic direction of Talmage Fauntleroy, stage director, and Nick Rossi, musicologist. In Italy, since 2005 the Tuscan Opera Academy “Domenico Cimarosa” has realized a summer program dedicated to Cimarosa's operas through the artistic and musical direction of Simone Perugini, composer, conductor, musicologist and Italian scholar of Cimarosa. Tuscan Opera Academy “Domenico Cimarosa” realizes two projects about the composer: the first one, called Centro cimarosiano di Studi for the publication of the opera omnia of the composer in critical edition (full score, vocal score and orchestral parts with commentary Foreword), the second one called The Opera Workshop for the production and set-up of composer's operas in critical editions by opera singers and instrumentalists expert on philological practice of 18th-century Italian music. Some arias from his operas were collected by Italian nobles in manuscript form: the Venturi Music Collection, owned by Italian noble family Sermolli, has some of this arias. * His music seems in style but original, the feeling stands out, the musical games are witty and educational ..... his works are still waiting to be well re-evaluated and performed ... the scores are present on the internetculturale website and some in the BNF Gallica website[4]

This article uses material from the article Domenico Cimarosa from the free encyclopedia Wikipedia and it is licensed under the GNU Free Documentation License.

By My Side Chris de Burgh
Update Required To play the media you will need to either update your browser to a recent version or update your Flash plugin.