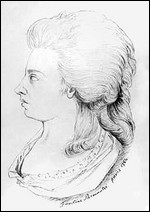 Maria Theresia Paradis (also von Paradies) (May 15, 1759 – February 1, 1824), was an Austrian musician and composer who lost her sight at an early age, and for whom Mozart may have written his Piano Concerto No. 18 in B-flat major.

Maria Theresia Paradis was the daughter of Joseph Anton Paradis, Imperial Secretary of Commerce and Court Councilor to the Empress Maria Theresa, for whom she was named. The Empress, however, was not her godmother, as was often believed. Between the ages of 2 and 5 she lost her eyesight. Paradis was treated from late 1776 until the middle of 1777 by the famous Franz Anton Mesmer, who was able to improve her condition temporarily until she was removed from his care, amid concerns on the one hand of possible scandal, on the other hand at the potential loss of her disability pension.[1] In either case, on this departure from Dr. Mesmer the blindness came back permanently.

She received a broad education in the musical arts from:

By 1775, Paradis was performing as a singer and pianist in various Viennese salons and concerts. She commissioned various works to perform, most notably:

On K.456, while this concerto is believed to be the one intended for Paradis, there are continuing questions concerning this. From Ruth Halliwell's The Mozart Family: Four Lives in a Social Context, we read:

It is not certain which concerto this was. Leopold [in a letter from Vienna] simply described it to Nannerl as a ‘glorious concerto’ and said it had been written for Maria Theresia von Paradis ‘for Paris.’ His description suggests that neither he nor Nannerl knew it already; if this is so, it must have been a later one than K.453, which seems to have been the newest they had in Salzburg at this date.

In any event, Paradis had an excellent memory and exceptionally accurate hearing, as she was widely reported to have learned over 60 concertos by heart, as well as a large repertoire of solo and religious works.

Paradis did not stay confined to Vienna. In 1783, she set out on an extended tour towards Paris and London, accompanied by her mother and librettist Johann Riedinger who invented a composition board for her. In August of that year they visited the Mozarts in Salzburg, though Nannerl's diary seems to place this meeting in September. She played in Frankfurt and other German cities, then Switzerland. Paradis finally reached Paris in March 1784.[2] Her first concert there was given in April at the Concert Spirituel; the review in the Journal de Paris for it remarked: "…one must have heard her to form an idea of the touch, the precision, the fluency and vividness of her playing." In all she made a total of 14 appearances in Paris, to excellent reviews and acclaim. She also assisted in helping Valentin Haüy ("the father and apostle of the blind") establish the first school for the blind, which opened in 1785.

She traveled to London in late 1784, and performed over the next few months at court, Carlton House (the home of the Prince of Wales), and in the Professional Concerts at Hanover Square, among other places. She played Handel fugues to George III and later accompanied the Prince of Wales, a cellist. However, her concerts lost ground, being less well received and attended in London than in Paris. She continued to tour in Western Europe (including Hamburg where she met Carl Philipp Emanuel Bach), and after passing through Berlin and Prague, ended up back in Vienna in 1786. Further plans were made to give concerts in the Italian states and Russia, but nothing came of these. She returned to Prague in 1797 for the production of her opera Rinaldo und Alcina.

During her tour of Europe, Paradis began composing solo music for piano as well as pieces for voice and keyboard. The earliest music attributed to her is often cited as a set of four piano sonatas from circa 1777, but these are really by Pietro Domenico Paradisi, to whom much of her music is often mistakenly attributed. Her earliest major work in existence is the collection Zwölf Lieder auf ihrer Reise in Musik gesetzt, composed between 1784-86.

Her most famous work, the Sicilienne in E-flat major for piano quartet, is spurious, as it is derived from a Carl Maria von Weber violin sonata (Op. 10 No. 1) and is believed to have been concocted by its purported discoverer, Samuel Dushkin.

By the year 1789, Paradis was spending more time with composition than performance, as shown by the fact that from 1789 to 1797 she composed five operas and three cantatas. After the failure of the opera Rinaldo und Alcina from 1797, she shifted her energy more and more to teaching. In 1808, she founded her own music school in Vienna, where she taught singing, piano and theory to young girls. A Sunday concert series at this school featured the work of her outstanding pupils. She continued to teach up until her death in 1824.

When composing, she used a composition board invented by Riedinger, her partner and librettist, and for correspondence a hand-printing machine invented by Wolfgang von Kempelen. Her songs are mostly representative of the operatic style, which displays coloratura and trills. Salieri's influence may be seen in the dramatically composed scenes. Much of the stage work is modeled on the Viennese Singspiel style, while her piano works show a great influence by her teacher Leopold Kozeluch.

Paradis is mentioned in a scene during which Antonio Salieri reports Emperor Joseph II Paradis' claim that she was molested by Mozart during a lesson. This claim, in the film's context, is ultimately portrayed as a ruse by Salieri to hinder Mozart's appointment to a royal position (teaching the Emperor's young niece).

This article uses material from the article Maria Theresia von Paradis from the free encyclopedia Wikipedia and it is licensed under the GNU Free Documentation License.

Jessie's Girl Rick Springfield
Update Required To play the media you will need to either update your browser to a recent version or update your Flash plugin.