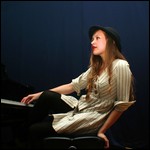 Newsom was born and raised in the small town of Nevada City, California. Her mother, Christine (née Mueller), is an internist, and her father, William Newsom, is also a doctor.[2] Her parents were "progressive-minded professionals" who previously lived in the Bay Area.[3] Newsom's family includes her brother, Pete, a fellow musician, and sister, Emily, who inspired her song "Emily" (and contributed backing vocals). She is the second cousin, twice removed, of Lieutenant Governor Gavin Newsom of California.[4]

As a child, Newsom was not allowed to watch television or listen to the radio because she was raised by parents whom she described as, "kind of idealists when it came to hoping they could protect us from bad influences, like violent movies, or stupid stuff".[5] She was exposed to music from a young age. Her father played the guitar and her mother was a classically trained pianist who played the hammered dulcimer, the autoharp and conga drums.[6][7] Newsom attended a Waldorf school where she studied theater and learned to memorize and recite long poems. This skill helps her to remember lyrics while on tour.[8]

At the age of five, Newsom asked her parents if she could play the harp. Her parents eventually agreed to sign her up for harp lessons, but the local harp instructor did not want to take on such a young student and suggested she learn to play the piano first. Starting at the age of four she began playing the piano. Only later did she move on to the harp, which she, "loved from the first lesson onward."[9] From her instructor, Joanna learned composition and improvisation. She first played on a smaller Celtic harps until her parents bought her a full-size pedal harp in the seventh grade.[10] During her teens, she and the instrument became inseparable, and she describes her relationship with the harp as similar to "an artificial limb or a wheelchair. Its almost part of me, but more to the point, it serves a purpose, and if it wasnt there I would wonder what was supposed to fit in its place."[5]

When she was 18, in the middle of her senior year of high school, she decided that she needed some sort of ritual marker of the end of childhood. Her plan was to camp in the open air for three days and nights, eating little, seeing no one, communing with the great outdoors. [11] Describing her experience, Newsom stated, I hesitate to speak about it because it sounds so corny, but one of my goals out there was to find a spirit-animal,. On the third day, I was kind of delirious. Id only eaten a little rice. Id just slept and looked at a river for three days. I was prepared to be visited by my spirit animal I was just sitting there, saying some sort of prayer, inviting that presence into my life. And then I saw three white wolves charging down at me. I thought maybe I was hallucinating; but I was also prepared to die. But the wolves ran up and started licking my face. Then I remembered that the daughter of the woman who owned the property kept domesticated wolves.[12]

After high school Newsom studied composition and creative writing at Mills College in Oakland, California. While at Mills, she played keyboards in The Pleased. She dropped out of the school in order to focus on her music.[5]

In 2002 and 2003, Newsom recorded two EPs, Walnut Whales and Yarn and Glue. These homemade recordings were intended to serve as a document of her early work; she recorded them on a Fisher-Price tape recorder.[13] These EPs were not intended for public distribution. At the suggestion of Noah Georgeson, her then-boyfriend and recording engineer of the EP, she burned several copies to sell at her early shows.[13] John Fellman, co-producer of Mission Creek Music and Arts Festival, claims to be the first to have booked a show for her.[14]

A friend of Newsom's passed one of these CDs on to Will Oldham at a show in Nevada City. Oldham was impressed with Newsom's music and asked her to tour with him. He also gave a copy of the CD to the owner of Drag City, his record label. Drag City signed Newsom and released her debut album The Milk-Eyed Mender in 2004.[15] Shortly thereafter, Newsom toured with Devendra Banhart and Vetiver and made an early UK appearance at the Green Man Festival in Wales, returning to headline in 2005, 2007 and 2010.

Her second album Ys was released in November 2006. The album features orchestrations and arrangements by Van Dyke Parks, engineering from Steve Albini and mixing by Drag City label-mate Jim O'Rourke. On a road trip, Bill Callahan recommended she listen to the album Song Cycle by Parks, which led to his being chosen to arrange her work on Ys.

Newsom is known to debut songs impromptu at her concerts. On March 28, 2009, she performed over two hours of new material at a "secret" concert in Big Sur, California with fellow Nevada City singer-songwriter Mariee Sioux under the pseudonym The Beatles's. Those in attendance reported that about one-third of her new material was played primarily on piano, with a backing arrangement of banjo, violin, guitar and drums.[16]

Since late 2006, Newsom has performed a solo harp version of the traditional Scottish song "Ca the Yowes Tae the Knowes".[17]

Newsom's work has become prominent on the independent music scene. Her profile has risen, in part, due to a number of live shows and appearances on shows like Jimmy Kimmel Live! on ABC.

On January 12, 2010, an entry cryptically entitled "@!?*(%$#!!" was posted on the Drag City website. It contained a link which led to a short comic strip titled "Joanna Newsom 'Have One on Me'" with a date of February 23, 2010.[21] Later that day, it was confirmed by Spunk, Newsom's Australian label, that the title and date represented the title of Newsom's upcoming album and its release date.[22] P-Vine Records in Japan announced that Have One on Me, which was recorded in Tokyo in 2009, would be released in Japan on March 3, 2010, as a three-disc CD set, with a total of approximately three hours of new recordings.[23] Newsom was chosen by Matt Groening to perform at the edition of the All Tomorrow's Parties festival he curated in May 2010 in Minehead, England.

On February 11, 2010, Pitchfork Media reported that Newsom would be the subject of a tribute book titled Visions of Joanna Newsom which has now been published by Roan Press.[24] She toured throughout Europe and America in 2010 to promote her latest record, supported by a five-piece band. In December 2010, a tribute album of Newsom covers was released as a digital download. Artists involved include M. Ward, Billy Bragg, Francesco Santocono, Guy Buttery and Owen Pallett, with all proceeds going to Oxfam America's Pakistan Flood Relief Efforts.[25]

On July 19, 2011, Newsom's second single, What We Have Known, was released on 12" vinyl. The single was originally the b-side to her first single, Sprout and the Bean.[26] In June 2011, she filmed her second music video (for the song "Good Intentions Paving Company") with directors Karni & Saul.[27] Newsom was also chosen by Jeff Mangum of Neutral Milk Hotel to perform at the All Tomorrow's Parties festival that he curated in March 2012 in Minehead, England.[28]

In late 2011, Newsom contributed vocals to "The Muppet Show Theme" for The Muppets[29] and appeared on the cover of the 10th anniversary issue of Under the Radar with Robin Pecknold.[30]

Newsom began 2012 with television appearances on Austin City Limits (on January 21) and Portlandia (on February 7).[31][32] On June 25, 2012, Newsom performed at the Warfield Theatre in San Francisco with Philip Glass and Tim Fain as part of a benefit for the Henry Miller Memorial Library.[33] She performed a new song at the concert tentatively titled "The Diver's Wife", a love story concerning pearl hunting.[34] On October 14, she performed another new song tentatively called "Look and Despair" at the Treasure Island Festival.[35]

Newsom appeared on a track titled "Kindness be Conceived" on Thao and the Get Down Stay Down's album We The Common, released in February 2013.[36] In March 2013, Newsom contributed to the song "The Man Who Ran The Town" on the Hard Skin album Why Do Birds Suddenly Appear.[37] Also in March 2013, Newsom participated in a short film for Melissa Coker's Wren clothing line. In the film, Newsom wears Wren clothing and performs a cover of Sandy Denny's "The North Star Grassman and the Ravens".[38]

Newsom's early work was strongly influenced by polyrhythms.[39] Her harp teacher, Diana Stork, taught her the basic pattern of four beats against three which creates an interlocking, shifting pattern that can be heard on Ys, particularly in the middle section of "Sawdust & Diamonds." After Ys, Newsom said she had lost interest in polyrhythms. They "stopped being fascinating to me and started feeling wanky."[40]

The media have sometimes labeled her as one of the most prominent members of the modern psych folk movement. Newsom, however, claims no ties to any particular music scene.[41] Her songwriting incorporates elements of Appalachian music and avant-garde modernism.

Newsom's vocal style (in the November 2006 issue of The Wire, she described her voice as "untrainable") has shadings of folk and Appalachian shaped-note timbres. Newsom has, however, expressed disappointment at comments that her singing is "child-like."[41]

Critics noticed a change in Newsom's voice on her latest album.[42][43] In the spring of 2009, Newsom developed vocal cord nodules and could not speak or sing for two months. The recovery from the nodules and further "vocal modifications" changed her voice.[44][45][46]

In addition to her solo work, Newsom has played on records by Smog, Vetiver, Nervous Cop, The Year Zero, Vashti Bunyan, Moore Brothers, Sydney Symphony Orchestra, Golden Shoulders, The Roots,[47] and Thao & The Get Down Stay Down, and played keyboards for The Pleased. She provided additional vocals for The Lonely Island's songs "Ras Trent" and "We Are A Crowd".

After five years of dating, Newsom's engagement to actor and SNL comedian Andy Samberg was confirmed by his representative in February 2013.[48][49] They married on September 21, 2013 in Big Sur, California.[50]

This article uses material from the article Joanna Newsom from the free encyclopedia Wikipedia and it is licensed under the GNU Free Documentation License.

The Look Of Love ABC
Update Required To play the media you will need to either update your browser to a recent version or update your Flash plugin.