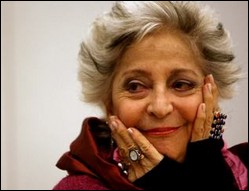 Teresa Berganza Vargas (born on 16 March 1935) is a Spanish mezzo-soprano. She is most closely associated with the roles of Rossini, Mozart, and Bizet. She is admired for her technical virtuosity, musical intelligence, and beguiling stage presence.

Teresa Berganza was born in Madrid. She studied piano and voice at the Madrid Conservatory, where she was awarded first prize for singing in 1954. She made her concert debut in Madrid in 1955.

Berganza made her operatic debut as Dorabella in Così fan tutte in 1957 at the Aix-en-Provence Festival. That same year, she made her Teatro alla Scala debut and the following year her debut at Glyndebourne. In 1959, Berganza made her first appearances at the Royal Opera House, Covent Garden as Rosina in Il barbiere di Siviglia, which became one of her signature roles. In 1967, she made her Metropolitan Opera debut as Cherubino in Le nozze di Figaro.

As a recitalist, Berganza made her Carnegie Hall debut in 1964. Her concert repertoire includes Spanish, French, German, and Russian songs. From 1957 to 1977, Berganza was married to the composer and pianist Félix Lavilla, with whom she recorded and performed regularly and with whom she has three children, including soprano Cecilia Lavilla Berganza.

Berganza shared the 1991 Prince of Asturias Award for arts and letters with six other Spanish singers. She also won the Grand Prix Rossini.[1]

In 1992, Berganza participated in the opening ceremonies of Expo '92 in Seville and the opening ceremonies of the 1992 Summer Olympics in Barcelona. In 1994, she became the first woman elected to the Real Academia de Bellas Artes de San Fernando. In 1996, she was awarded the Premio Nacional de Música.[2] She currently teaches singing at the Escuela Superior de Música Reina Sofía, continues to perform music of Spanish composers, and gives master classes all over the world. Her students have included María Bayo and Jorge Chaminé.

Teresa Berganza has appeared in nine motion pictures, including Il barbiere di Siviglia in 1972, as Zerlina in Joseph Losey's Don Giovanni in 1979, and both Werther and Carmen in 1980.

This article uses material from the article Teresa Berganza from the free encyclopedia Wikipedia and it is licensed under the GNU Free Documentation License.

Better Man Pegasus
Update Required To play the media you will need to either update your browser to a recent version or update your Flash plugin.