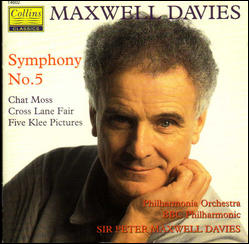 Sir Peter Maxwell Davies, CBE (born 8 September 1934) is an English composer and conductor and is currently Master of the Queen's Music.[1]

Davies was born in Salford, Lancashire, the son of Thomas and Hilda Davies.[2] He took piano lessons and composed from an early age. As a 14-year-old he submitted a composition called "Blue Ice" to BBC Children's Hour in Manchester. Producer Trevor Hill showed it to resident pianist Violet Carson who said "He's either quite brilliant or mad". Conductor Charles Groves nodded his approval and said, "I'd get him in". They did and his rise to fame began under the careful mentorship of Hill who made him their resident composer and introduced him to various professional musicians both in the UK and Germany. (The full story can be found in Over the Airwaves, the autobiography of Trevor Hill published by Book Guild in 2005). After education at Leigh Boys Grammar School, Davies studied at the University of Manchester and at the Royal Manchester College of Music (amalgamated into the Royal Northern College of Music in 1973), where his fellow students included Harrison Birtwistle, Alexander Goehr, Elgar Howarth and John Ogdon. Together they formed New Music Manchester, a group committed to contemporary music. After graduating in 1956, he studied on an Italian government scholarship for a year with Goffredo Petrassi in Rome before working as Director of Music at Cirencester Grammar School from 1959 to 1962.[3]

In 1962, he secured a Harkness Fellowship at Princeton University, with the help of Aaron Copland and Benjamin Britten,[4] where he studied with Roger Sessions, Milton Babbitt and Earl Kim. He then moved to Australia, where he was Composer in Residence at the Elder Conservatorium of Music, University of Adelaide from 196566.

He then returned to the United Kingdom and moved to the Orkney Islands, initially to Hoy in 1971, and later to Sanday, where he lives with his partner Colin Parkinson. Orkney (particularly its capital, Kirkwall) hosts the St Magnus Festival, an arts festival founded by Davies in 1977. He frequently uses it to premiere new works (often played by the local school orchestra).

Davies was Artistic Director of the Dartington International Summer School from 1979 to 1984 and has held a number of posts. From 1992 to 2002 he was associate conductor/composer with the Royal Philharmonic Orchestra and he has conducted a number of other prominent orchestras, including the Philharmonia, the Cleveland Orchestra, the Boston Symphony Orchestra and the Leipzig Gewandhaus Orchestra. In 2000 Davies was Artist in Residence at the Barossa Music Festival when he presented some of his music theatre works and worked with students from the Barossa Spring Academy. Davies is also Composer Laureate of the Scottish Chamber Orchestra, for whom he wrote a series of ten Strathclyde Concertos.[5]

He has been awarded a number of honorary doctorates, at various institutions. He has been President of Making Music (The National Federation of Music Societies) since 1989. Davies was made a CBE in 1981 and knighted in 1987. He was appointed Master of the Queen's Music for a ten-year period from March 2004. Made a freeman of the City Of Salford August 2004. Oxford awarded him an honorary Doctor of Music degree in July 2005. On 25 November 2006, Sir Peter was appointed an Honorary Fellow of Canterbury Christ Church University at a service in Canterbury Cathedral. He is also a visiting professor of composition at the Royal Academy of Music,[6] and in 2009 became an Honorary Fellow of Homerton College, Cambridge.[7]

Davies was one of the first classical composers to open a music download website, MaxOpus, (in 1996). The site became temporarily unavailable after the arrest in June 2007 of Michael Arnold (one of MaxOpus's directors) on fraud charges arising from money missing from Davies's business accounts.[8][9] In October 2008 Arnold and his wife Judith (Davies' former agent) were charged with the theft of almost £450,000.[10] In November 2009, Michael Arnold was sentenced to 18 months in jail.[11] Maxopus.com was relaunched earlier in 2009.

Davies was known as an 'enfant terrible' of the 1960s, whose music frequently shocked audiences and critics. One of his overtly theatrical and shocking pieces was Eight Songs for a Mad King (1969), in which he utilised 'musical parody' by taking a canonical piece of music, Handel's Messiah, and subverting it to suit his own needs.

Davies is openly gay. In 2007, a controversy arose regarding his intended civil partnership when he was told that the ceremony could not take place on the Sanday Light Railway.[12] He later abandoned his plans.[13]

Davies is known informally as "Max", after his middle name "Maxwell". A reporter for The Independent humorously recalled the confusion this brought about when Davies was staying in Las Vegas. No one seemed able to locate him at any hotel, despite trying "Maxwell Davies", "Davies", "Max", "Sir Peter" and every other imaginable permutation. It was finally discovered that the hotel had registered him as "Mavis", which inspired the composer to produce the orchestral piece Mavis in Las Vegas.[14]

Davies has a keen interest in environmentalism. He wrote The Yellow Cake Revue, a collection of cabaret-style pieces that he performed with actress Eleanor Bron, in protest at plans to mine uranium ore in Orkney. It is from this suite of pieces that his famous instrumental chanson triste interlude Farewell to Stromness is taken. The slow, walking bass line that pervades the Farewell portrays the residents of the village of Stromness having to leave their homes as a result of uranium contamination. The Revue was first performed at the St. Magnus Festival, in Orkney, by Bron, with the composer at the piano, in June 1980. Stromness, the second largest town in Orkney, would have been two miles from the uranium mine's core, and the center most threatened by pollution, had the proposed development been approved.

In the run-up to the Iraq War in 2003 he marched in protest, and has been an outspoken critic of the Ministries of both Gordon Brown and Tony Blair.[15]

Davies' appointment to the post of Master of the Queen's Music was initially controversial, as he was a republican. However he confirmed in 2010 that close contact with the Queen had converted him to monarchism. He told the Daily Telegraph "I have come to realise that there is a lot to be said for the monarchy. It represents continuity, tradition and stability."[15]

He is a member of the British Academy of Songwriters, Composers and Authors (BASCA),[16]

Davies is a prolific composer who has written music in a variety of styles and idioms over his career, often combining disparate styles in one piece.

Early works include the Trumpet Sonata (1955), written while he was at college, and his first orchestral work, Prolation (1958), written while under the tutelage of Petrassi. Early works often use serial techniques (for example Sinfonia for chamber orchestra, 1962), sometimes combined with Mediaeval and Renaissance compositional methods. Fragments of plainsong are often used as basic source material to be adapted and developed in various ways.

Pieces from the late 1960s take up these techniques and tend towards experimental and a violent character these include Revelation and Fall (based on a poem by Georg Trakl), the music theatre pieces Eight Songs for a Mad King and Vesalii Icones, and the opera Taverner. Taverner again shows an interest in Renaissance music, taking as its subject the composer John Taverner, and consisting of parts resembling Renaissance forms. The orchestral piece St Thomas Wake (1969) also shows this interest, and is a particularly obvious example of Davies's polystylism, combining, as it does, a suite of foxtrots (played by a twenties-style dance band), a pavane by John Bull and Davies's "own" music (the work is described by Davies as a "Foxtrot for orchestra on a pavan by John Bull"). Many works from this period were performed by the Pierrot Players which Davies founded with Harrison Birtwistle in 1967 (they were reformed as the Fires of London in 1970, disbanded in 1987).

Davies is known for his use of magic squares as a source of musical materials and as a structural determinant. In his work Ave Maris Stella (1975) he used a 9x9 square numerologically associated with the moon, reduced modulo 9 to produce a Latin square, to permute the notes of a plainsong melody with the same name as the piece and to govern the durations of the notes.

Worldes Blis (1969) indicated a move towards a more integrated and somewhat more restrained style, anticipating the calm which Davies would soon find at his new home in Orkney. Some have drawn a comparison[weasel words] between this later style and the music of Jean Sibelius. His present style is regarded as much more accessible, to the point where Harrison Birtwistle no longer regarded him as a modernist.[17]

Since his move to Orkney, Davies has often drawn on Orcadian or more generally Scottish themes in his music, and has sometimes set the words of Orcadian writer George Mackay Brown. He has written a number of other operas, including The Martyrdom of St Magnus (1976), The Lighthouse (1980, his most popular opera), and The Doctor of Myddfai (1996). The ambitious, nihilistic parable Resurrection (1987), which includes parts for a rock band, was nearly twenty years in gestation.

Davies also became interested in classical forms, completing his first symphony in 1976. He has written nine numbered symphonies sincea symphonic cycle of the Symphonies Nos.17 (1976-2000), a Symphony No. 8 titled the 'Antarctic' (2000), a Ninth Symphony (premiered on 9 June 2012 by the Royal Liverpool Symphony Orchestra), a Sinfonia Concertante (1982), as well as the series of ten Strathclyde Concertos for various instruments (pieces born out of his association with the Scottish Chamber Orchestra, 1987-1996). In 2002, he began work on a series of string quartets for the Maggini String Quartet to record on Naxos Records (the so-called Naxos Quartets). The whole series was completed in 2007, and is viewed by the composer as a novel in ten chapters".[18]

Davies's lighter orchestral works have included Mavis in Las Vegas and Orkney Wedding, With Sunrise (which features the bagpipes), as well as a number of theatre pieces for children and a good deal of music with educational purposes. Additionally he wrote the scores for Ken Russell's films The Devils and The Boy Friend.

Maxwell Davies's short piano piece Farewell to Stromness entered the Classic FM Hall of Fame in 2003, his first ever entry, and was at that time the fastest-rising new entry in the chart's history.

He also writes with particular affinity for young and non-professional performers; for example, his Fanfare: A salute to Dennis Brain is targeted at players of grade 6 standard or above,[19] and he has composed several children's operas including A Selkie Tale, The Great Bank Robbery and The Spider's Revenge. Other children's works include Chat Moss and A Hoy Calendar both written for first performance by the children of St Edward's College Liverpool.

A Hymn to the Spirit of Fire was commissioned by the Liverpool Metropolitan Cathedral Concerts Society as the culmination of the city's Capital of Culture year 2008 and was given its world premiere at the Cathedral on Saturday 13 December.

His Violin Concerto No. 2 received its UK premiere on 8 September 2009 (the composer's 75th birthday) in the Royal Albert Hall, London, as part of the 2009 season of the BBC Proms.

On 13 October 2009, his string sextet The Last Island was performed for the first time by the Nash Ensemble at Wigmore Hall in a 75th birthday concert for the composer.

This article uses material from the article Peter Maxwell Davies from the free encyclopedia Wikipedia and it is licensed under the GNU Free Documentation License.

Say What You Want Texas
Update Required To play the media you will need to either update your browser to a recent version or update your Flash plugin.