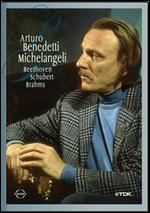 Arturo Benedetti Michelangeli (Italian: [arˈtuːro beneˈdetti mikeˈlandʒeli]; 5 January 1920 – 12 June 1995) was an Italian classical pianist. He is considered one of the greatest pianists of the twentieth century.[1]

Born in Brescia, Italy, he began music lessons at the age of three, initially with the violin, but quickly switched to the piano. At eleven he entered the Milan Conservatory, graduating three years later at fourteen. In 1938, at the age of eighteen, he began his international career by entering the Ysaÿe International Festival in Brussels, Belgium, where he was placed seventh. (A brief account of this competition, at which Emil Gilels took first prize and Moura Lympany second, is given by Arthur Rubinstein, who was one of the judges. According to Rubinstein, Benedetti Michelangeli gave "an unsatisfactory performance, but already showed his impeccable technique.") A year later he earned first prize in the Geneva International Competition, where he was acclaimed as "a new Liszt" by pianist Alfred Cortot, a member of the judging panel, which was presided over by Ignacy Jan Paderewski.

The teacher and commentator David Dubal argued that he was best in the earlier works of Beethoven and seemed insecure in Chopin, but that he was "demonic" in such works as the Bach-Busoni Chaconne and the Brahms Paganini Variations.[3]

His repertoire was seemingly strikingly small for a concert pianist of such stature, indeed we know from colleagues and students that he dominated most of the piano repertoire.[4] Owing to his perfectionism, relatively few recordings were officially released during Benedetti Michelangeli's lifetime, but these are augmented by numerous unauthorized recordings of live performances. Discographical highlights include the (authorized) live performances in London of Ravel's Gaspard de la nuit, Chopin's Mazurkas and Sonata No. 2, Schumann's Carnaval, Op. 9 and Faschingsschwank aus Wien, Op. 26 as well as various recordings of Beethoven's Piano Concerto No. 5, Liszt's Piano Concerto No. 1 and Totentanz, and the piano concertos of Robert Schumann, and Edvard Grieg. In addition, his playing of Ravel's Piano Concerto in G and Gaspard de la nuit set standards for those works. His reading of Rachmaninoff's Piano Concerto No. 4 is comparable to that of Rachmaninoff himself. His Debussy series for DG is something of a benchmark, even if it is sometimes accused of being a little unatmospheric ("swimming in cool water," in Dubal's words). He is also credited with the rediscovery of some works of Catalan composer Federico Mompou.

As a composer, Benedetti Michelangeli arranged 19 Italian Folksongs a cappella for the Coro della Società Alpinisti Tridentini, a men's chorus from Trento (Italy). A recording of these pieces can be found on the DIVOX music label.

As a teacher, his pupils included world-class artists as Maurizio Pollini, Martha Argerich and Ivan Moravec.

On 20 September 1943 Benedetti Michelangeli married pianist Giulia Linda Guidetti, who was a pupil of his father. She was a valued counselor and secretary to her husband. She lived quietly, sharing time with her husband at their villa in Bornato, near Brescia, or in Bolzano or Arezzo, and appeared so seldom in public with her husband that hardly anybody knew he was married. They separated in 1970.

From 1970 on, his secretary, and later his agent and partner, Marie-José Gros-Dubois, was faithfully near his side. She organized concerts and dates for him, and also presided over his financial affairs.

Benedetti Michelangeli reputedly did not enjoy giving concerts. In an interview, Gros-Dubois remembered that he could not believe that his concerts were worth so much money. After a concert, she reported that he gloomily said: "You see, so much applause, so much public. Then, in half an hour, you feel alone more than before."[5]

Benedetti Michelangeli was a connoisseur of the mechanics of the piano and he insisted that his concert instruments be in perfect condition.[6] Whenever possible he took his own Steinway piano with him on tour. His last concert (all Debussy) took place on 7 May 1993 in Hamburg, Germany. After an extended illness he died in Lugano, Switzerland. He is buried in nearby Pura.[7]

This article uses material from the article Arturo Benedetti Michelangeli from the free encyclopedia Wikipedia and it is licensed under the GNU Free Documentation License.

Red Daniel Merriweather
Update Required To play the media you will need to either update your browser to a recent version or update your Flash plugin.