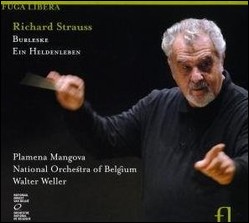 While leading the orchestra, Weller also established and led his own string quartet, the Weller Quartet, from 1958 to 1969.[3] In 1966, he married Elisabeth Samohyl, and the couple had a son.

His widow and son survive him.[1]

The Weller Quartet's recordings for Decca Records included Haydn’s complete Op 33, Mozart, Beethoven, Brahms, Berg and Shostakovich. Weller's recording début as a conductor was with the Suisse Romande Orchestra, in Shostakovich's Symphony No. 1 and Symphony No. 9. His recordings of the Beethoven, Mendelssohn and Prokofiev symphony cycles have long remained available on LP and CD.

Weller collected many prizes and awards, including the Grand Decoration of Honour in Silver for services to the Republic of Austria, bestowed on him in 1998.[8]

This article uses material from the article Walter Weller from the free encyclopedia Wikipedia and it is licensed under the GNU Free Documentation License.