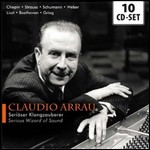 Claudio Arrau León (Spanish pronunciation: [ˈklau̯ðjo aˈrau̯]; February 6, 1903 – June 9, 1991) was a Chilean pianist known for his interpretations of a vast repertoire spanning the baroque to 20th-century composers, especially Bach, Beethoven, Schubert, Chopin, Schumann, Liszt and Brahms. He is widely considered one of the greatest pianists of the twentieth century.[1] Arrau was a pupil of Martin Krause, who was a student of Franz Liszt.

Arrau was born in Chillán, Chile, the son of Carlos Arrau, an ophthalmologist who died when Claudio was only a year old, and Lucrecia León Bravo de Villalba, a piano teacher. He belonged to an old, prominent family of Southern Chile. His ancestor Lorenzo de Arrau, a Spanish engineer, was sent to Chile by King Carlos III of Spain. Through his great-grandmother, María del Carmen Daroch del Solar, Arrau was a descendant of the Campbells of Glenorchy, a Scottish noble family.[2] Arrau was raised as a Catholic, but gave it up in his late teens.[3]

Arrau was a child prodigy and he could read music before he could read words, but unlike many virtuosos, there had never been a professional musician in his family. His mother was an amateur pianist and introduced him to the instrument. At the age of 4 he was reading Beethoven sonatas, and he gave his first concert a year later.[4] When Arrau was 6 he auditioned in front of several congressmen and President Pedro Montt, who was so impressed that he began arrangements for Arrau's future education. At age 8, Arrau was sent on a ten-year-long grant from the Chilean government to study in Germany, travelling with his mother and sister Lucrecia. He was admitted to the Stern Conservatory of Berlin where he eventually became a pupil of Martin Krause, who had studied under Franz Liszt. At the age of 11 Arrau could play Liszt's Transcendental Etudes, one of the most difficult works for piano, as well as Brahms's Paganini Variations. Arrau's first recordings were made on Aeolian Duo-Art player piano music rolls. Krause died in his fifth year of teaching Arrau, leaving the 15-year-old student devastated by the loss of his mentor; Arrau did not continue formal study after that point.[4]

In 1935, Arrau gave a celebrated rendition of the entire keyboard works of Johann Sebastian Bach over 12 recitals. In 1936, Arrau gave a complete Mozart keyboard works over 5 recitals, and followed with the complete Schubert and Weber cycles. In 1938, for the first time, Arrau gave the complete Beethoven piano sonatas and concertos in Mexico City. Arrau repeated this several times in his lifetime, including in New York and London. He became one of the leading authorities on Beethoven in the 20th century.[4][1]

Arrau died on June 9, 1991, at the age of 88, in Mürzzuschlag, Austria, from complications of emergency surgery performed on June 8 to correct an intestinal blockage.[7] His remains were interred in his native city of Chillán, Chile.

Tone and approach to music

Daniel Barenboim said that Claudio Arrau had a particular sound with two aspects: first a thickness, full-bodied and orchestral, and second an utterly disembodied timbre, quite spellbinding.[8] Sir Colin Davis said: "His sound is amazing, and it is entirely his own... no one else has it exactly that way. His devotion to Liszt is extraordinary. He ennobles that music in a way no one else in the world can."[8] According to American critic Harold C. Schonberg, Arrau always put "a decidedly romantic piano tone in his interpretations".[9]

Arrau was an intellectual and a deeply reflective interpreter. He read widely while travelling, and he learned English, Italian, German, and French in addition to his native Spanish. He became familiar with Jung's psychology in his twenties.[10]

Arrau's attitude toward music was very serious. He preached fidelity to the score, but also the use of imagination. Although he often played with slower and more deliberate tempi from his middle age onward, he had a reputation as a fabulous virtuoso earlier in his career, a reputation supported by recordings he made at this time, such as Balakirev's Islamey and Liszt's Paganini études. However, even late in his career, he often tended to play with less restraint in live concerts than in studio recordings.

Arrau was a man of remarkable fortitude; even towards the end of his life he invariably programmed very large, demanding concerts, including works such as Beethoven's Emperor Concerto and Brahms' Piano Concerto No. 1.[1]

He was a frequent recital performer: from age 40 to 60 he averaged 120 concerts a season, with a very large repertoire. At one time or another, he performed the complete keyboard works of Bach, Mozart, Beethoven and Chopin; but also programmed such off-the-beaten-path composers as Alkan and Busoni and illuminated obscure corners of the Liszt repertoire. It has been estimated that Arrau's total repertoire would carry him through 76 recital evenings, not counting the 60-odd works with orchestra which he also knew.[4]

Arrau recorded a considerable part of the piano music of Schumann, Chopin and Liszt. He edited the complete Beethoven piano sonatas for the Peters Urtext edition and recorded all of them on the Philips label in 1962–1966. He recorded almost all of them once again after 1984 along with Mozart's complete piano sonatas. He is also famous for his recordings of Schubert, Brahms and Debussy.

At the time of his death at age 88 in the midst of a European concert tour, Arrau was working on a recording of the complete works of Bach for keyboard, and was also preparing some pieces of Haydn, Mendelssohn, Reger and Busoni, and Boulez's third piano sonata.

The Robert Schumann Society established the Arrau Medal in 1991. It has been awarded to András Schiff, Martha Argerich and Murray Perahia.

This article uses material from the article Claudio Arrau from the free encyclopedia Wikipedia and it is licensed under the GNU Free Documentation License.

We Are The World USA For Africa
Update Required To play the media you will need to either update your browser to a recent version or update your Flash plugin.