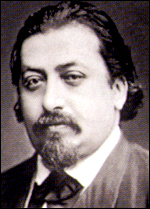 Henryk Wieniawski was born in Lublin, Congress Poland. His father, Tobiasz Pietruszka (Wolf Helman), was the son of a Jewish barber named Herschel Meyer Helman, from the Jewish Lublin neighbourhood of Wieniawa, when barbers were also practising dentists, healers, and bloodletters. Wolf Helman, also known as Tobiasz Pietruszka, changed his name to Tadeusz Wieniawski, taking on the name of his neighbourhood to blend into his Polish environment better. Prior to obtaining his medical degree, he had converted to Catholicism. He married Regina Wolff, the daughter of a noted Jewish physician from Warsaw, and out of this marriage Henryk was born. His talent for playing the violin was recognised early, and in 1843 he was accepted by the Paris Conservatoire, where special exceptions were made to admit him, as he wasn't French and was only nine years old. After graduation, Henryk toured extensively and gave many recitals, where he was often accompanied by his brother Józef on piano. In 1847, he published his first opus, a Grand Caprice Fantastique, the start of a catalogue of 24 opus numbers.

When his engagement to Isabella Hampton was opposed by her parents, Wieniawski wrote Légende, Op. 17; this work helped her parents change their mind, and the couple married in 1860.

At the invitation of Anton Rubinstein, Wieniawski moved to St. Petersburg, where he lived from 1860 to 1872, taught many violin students, and led the Russian Musical Society's orchestra and string quartet. From 1872 to 1874, Wieniawski toured the United States with Rubinstein. Wieniawski replaced Henri Vieuxtemps as violin professor at the Conservatoire Royal de Bruxelles in 1875.

During his residence in Brussels, Wieniawski's health declined, and he often had to stop in the middle of his concerts. He started a tour of Russia in 1879 but was unable to complete it, and was taken to a hospital in Odessa after a concert. On 14 February 1880, Pyotr Ilyich Tchaikovsky's patroness Nadezhda von Meck took him into her home and provided him with medical attention.[1][2] His friends also arranged a benefit concert to help provide for his family. He died in Moscow a few weeks later from a heart attack and was interred in the Powązki Cemetery in Warsaw.

His daughter Régine Wieniawski, born in Brussels the year before his death, also became a composer. She published her early works as "Irène Wieniawska," but after marrying Sir Aubrey Dean Paul and becoming a British subject, she used the pseudonym "Poldowski."[3] Another daughter, Henriette, would go on to marry Joseph Holland Loring in 1904, who was among the victims of the Titanic disaster.

Wieniawski was a player in the Beethoven Quartet Society in London, where he also performed on viola.

Henryk Wieniawski was considered a violinist of great ability and wrote some very important works in the violin repertoire, including two technically demanding violin concertos, the second of which (in D minor, 1862) is more often performed than the first (in F-sharp minor, 1853). His L'École moderne: 10 Études-caprices is a very well known work for aspiring violinists. His Scherzo-Tarantelle, Op.16 and Légende, Op.17 are also frequently performed works. He also wrote several mazurkas for solo violin and piano accompaniment (including the popular Obertass in G major), using techniques such as left-hand pizzicato, harmonics, large leaps, and many double stops.

Wieniawski was given a number of posthumous honours. His portrait appeared on a postage stamp of Poland in 1952 and again in 1957. A 100 złoty coin was issued in 1979 bearing his image.

This article uses material from the article Henryk Wieniawski from the free encyclopedia Wikipedia and it is licensed under the GNU Free Documentation License.