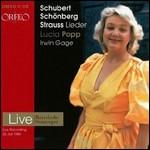 Lucia Popp (born Lucia Poppová; 12 November 1939 – 16 November 1993) was a Slovak operatic soprano. She began her career as a soubrette soprano, and later moved into the light-lyric and lyric coloratura soprano repertoire and then the lighter Richard Strauss and Wagner operas. Her career included performances at Vienna State Opera, the Metropolitan Opera, Covent Garden, and La Scala. Popp was also a highly regarded recitalist and lieder singer.

Popp initially entered the Bratislava Academy to study drama. While she began her vocal lessons during this period as a mezzo-soprano, her voice developed a high upper register to the degree that her professional debut was as the Queen of the Night in Mozart's The Magic Flute in Bratislava, a role she revived in a 1963 recording conducted by Otto Klemperer.

In 1963, Herbert von Karajan invited her to join the Vienna State Opera, where she debuted as Barbarina in Mozart's The Marriage of Figaro. Popp had strong ties to the Vienna State Opera throughout her career, and in 1979 was named an Austrian Kammersängerin. She made her Covent Garden debut in 1966 as Oscar in Verdi's Un ballo in maschera, and her Metropolitan Opera debut in 1967 as the Queen of the Night (production designed by Marc Chagall).

During the 1970s, Popp turned from coloratura roles to lyric ones. Then, in the 1980s, she added heavier roles to her repertoire, such as Elsa in Wagner's Lohengrin and Eva in the same composer's Die Meistersinger von Nürnberg. As a result of this vocal progression, Popp sang various roles in the same opera at different stages in her career, including Zdenka and Arabella in Richard Strauss's Arabella; Susanna and the Countess in Mozart's The Marriage of Figaro; Queen of the Night and Pamina in Mozart's The Magic Flute; Zerlina, Donna Elvira, and later Donna Anna in Mozart's Don Giovanni; Adele and Rosalinde in Johann Strauss II's Die Fledermaus; Annchen and Agathe in Weber's Der Freischütz; and Sophie and the Marschallin in Richard Strauss's Der Rosenkavalier.

She played the role of Tereza in the 1963 Slovak film Jánošík about the Slovak highwayman Juraj Jánošík.[1]

Her first husband was Hungarian pianist and conductor György Fischer.[2]

Popp died of brain cancer in 1993 in Munich, Germany, at the age of 54.[3] She was buried in Cintorín Slávičie údolie, Bratislava. Her second husband, noted German tenor, Peter Seiffert, survived her. In March 2007, on BBC Music magazine's list of the "20 All-time Best Sopranos" based on a poll of 21 British music critics and BBC presenters, Popp placed seventh.

Popp rarely recorded roles she did not perform on stage (with a few exceptions, including Elisabeth in Wagner's Tannhäuser and the title role in Richard Strauss's Daphne) The following is a selection of her recordings:

She was Sophie in Richard Strauss' Der Rosenkavalier DG 00440 073 4072 Carlos Kleiber conductor, Bayerisches Staatsorchester; Otto Schenk director, recorded 1979. There is a recording of Lucia Popp soloing in Strauss' Four Last Songs with Sir Georg Solti and the Chicago Symphony. In 1993 she was the soprano soloist in Antonín Dvořák's Requiem with the Prague Symphony Orchestra conducted by Petr Altrichter on Arthaus music DVD 102145.

This article uses material from the article Lucia Popp from the free encyclopedia Wikipedia and it is licensed under the GNU Free Documentation License.