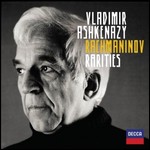 Vladimir Davidovich Ashkenazy (Russian: Влади́мир Дави́дович Ашкена́зи, Vladimir Davidovich Ashkenazi; born 6 July 1937) is an internationally recognized solo pianist, chamber music performer, and conductor. He is originally from Russia and has held Icelandic citizenship since 1972. He has lived in Switzerland since 1978. Ashkenazy has collaborated with well-known orchestras and soloists. In addition, he has recorded a large storehouse of classical and romantic works. His recordings have earned him five Grammy awards plus Iceland's Order of the Falcon.

Ashkenazy was born in Gorky, Soviet Union (now Nizhny Novgorod, Russia), to the pianist and composer David Ashkenazi and to the actress Yevstolia Grigorievna, born Plotnova. His father was Jewish and his mother was the daughter of a family of Russian Orthodox parents.[1][2][3] He began playing piano at the age of six. He was accepted to the Central Music School at age eight studying with Anaida Sumbatyan.

In 1961, he married the Iceland-born Þórunn Jóhannsdóttir, who studied piano at the Moscow Conservatory.[1] To marry Ashkenazy, Þórunn was forced to give up her Icelandic citizenship and declare that she wanted to live in the USSR. (Her name is usually transliterated as Thorunn and her nickname was Dódý.[4] She is recorded as Dódý Ashkenazy.[5])

After numerous bureaucratic procedures, the Soviet authorities agreed to allow the Ashkenazys to visit the West for musical performances and for visits to his parents-in-law with their first grandson. In his memoirs, Soviet leader Nikita Khrushchev recollects that Ashkenazy had married an Englishwoman [sic] and on a visit to London refused to return to the Soviet Union. Khrushchev mentions that Ashkenazy then sought advice from the Soviet Embassy in London, who in turn referred the matter to Moscow. Khrushchev claims to have been of the opinion that to require Ashkenazy to return to the USSR would have made him an "Anti-Soviet". He further claims that this was a good example of an artist being able to come and go in and out of the USSR freely, which Ashkenazy himself said was a gross "distortion of the truth.".[6] In 1963 Ashkenazy decided to leave the USSR permanently, establishing residence in London where his wife's parents lived.

The couple moved to Iceland in 1968 where, in 1972, Ashkenazy became an Icelandic citizen.[7] In 1970 he helped to found the Reykjavík Arts Festival, of which he remains Honorary President.[8][9] In 1978 the couple and their (then) four children (Vladimir Stefan, Nadia Liza, Dimitri Thor, and Sonia Edda) moved to Lucerne, Switzerland. Their fifth child, Alexandra Inga, was born in 1979. As of 1989, Ashkenazy resides in Meggen.[10] His eldest son Vladimir, who uses his nickname 'Vovka' as a stage name, is a pianist, as well as a teacher at the Imola International Piano Academy. His second son, Dimitri, is a clarinetist.

Ashkenazy has recorded a wide range of piano repertoire, both solo works and concerti. His recordings include:

His concerto recordings include:

In public piano performances, Ashkenazy was known for rejecting a tie and button shirt in favor of a white turtleneck and for running (not walking) onstage and offstage. He has also performed and recorded chamber music.

Moreover, Ashkenazy has had an acclaimed collaborative career, including an acclaimed recording of Beethoven's complete violin sonatas with Itzhak Perlman, as well as the cello sonatas with Lynn Harrell, and the piano trios with Harrell and Perlman.

Midway through his pianistic career, Ashkenazy branched into conducting. In Europe, Ashkenazy was principal conductor of the Royal Philharmonic Orchestra from 1987 to 1994, and of the Czech Philharmonic from 1998 to 2003. Ashkenazy is also conductor laureate of the Philharmonia Orchestra, conductor laureate of the Iceland Symphony Orchestra, and music director of the European Union Youth Orchestra.[11] In July 2013 he became director of the Accademia Pianistica Internazionale di Imola, succeeding its founder and director Franco Scala.[12] His recordings as a conductor include complete cycles of the symphonies of Sibelius and of Rachmaninoff, as well as orchestral works of Prokofiev, Shostakovich, Scriabin, Richard Strauss, Stravinsky, Beethoven, and Tchaikovsky.

Ashkenazy has recorded for Decca since 1963; in 2013, Decca celebrated his 50th anniversary with the label with the box set 'Vladimir Ashkenazy: 50 Years on Decca', including 50 of Ashkenazy's recordings as both pianist and conductor.[14] As part of Ashkenazy's 80th birthday celebrations, Decca is releasing the 'Complete Piano Concerto Recordings' and 'Ashkenazy on Vinyl' in July 2017.

In other media, Ashkenazy has also appeared in several films on music by Christopher Nupen. He has also made his own orchestration of Modest Mussorgsky's piano suite Pictures at an Exhibition (1982). There has been a CD produced of his works named 'The Art of Ashkenazy', and a biography of Ashkenazy, 'Beyond Frontiers', has been published.

This article uses material from the article Vladimir Ashkenazy from the free encyclopedia Wikipedia and it is licensed under the GNU Free Documentation License.